The Skirmish at the Chaos Temple was a small battle fought in the Wilderness, as part of a chain of conflicts with the evil Mahjarrat Lucien. A small party was sent to apprehend him and they arrived just in time, as Lucien had just seen through the spying player's disguise as Surok Magis and had started to attack him with powerful magic balls, which the player managed to evade, but instead hit two Elite Black Knights, who were burned to crisps. Beforehand, Lucien had used the incantation Eki tha nke rius Zanka Tdaterius to summon about a dozen of undead heroes to aid him in battle. As soon as the heroes teleport in, they split: Harrallak and Mazchna will take on the skeletons whilst the others attempt to kill Lucien. Sloane and Duradel get into position, but, before they can do anything, are incinerated by the same black ball spell. Next, Hazelmere fires his supposedly strongest attack at Lucien, a barrage of magical crystals, but they bounce off Lucien due to the power of the Staff of Armadyl. Cyrisus and Turael now attack Lucien, but their weapons break and Lucien kills them, along with Ghommal, who had just joined the two. However, the spell bounces further to Hazelmere, who could not use Argento's last seed pod to escape, and turns him too into dust, leaving only his hat. The power of the spell also knocked Mazchna a few meters back. Lucien takes a final glance at his "lovely devastation", then teleports away with his army. The two survivors, Harrallak and Mazchna, too, teleport away, while the player is being assaulted by elite black knights. 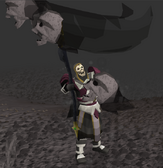 A wave of undead!

Hazelmere watches from a telescope

The heroes ready to battle lucien

Teleporting to your aid 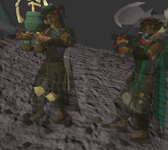 Oh no! Our weapons are useless!

Lucien begins to charge an attack.

Lucien is proud of his devastation

Only Harrallak and Mazchna are left.
Click an image to enlarge
Retrieved from "https://runescape.fandom.com/wiki/Skirmish_at_the_Chaos_Temple?oldid=25380695"
Community content is available under CC-BY-SA unless otherwise noted.