Sliske's Labyrinth is located under the Heart of Gielinor and is accessed only during Sliske's Endgame. Inside the labyrinth, the gods and other divine beings have had their divinity removed, putting them on an equal playing field with the World Guardian. The labyrinth is split into two parts, in which the player has to travel from the most south-west room to the most north-east. The first to the end of the first labyrinth gets to remove the entourage of one of the participants; the first two to reach the end of the second labyrinth (one of which is always the World Guardian, the other being Armadyl, Saradomin, or Zamorak) engage in a footrace for the Stone of Jas.

In the labyrinth, puzzles must be completed to rotate key rooms in order to progress. Puzzles include mask shadow puzzles (like encountered in Missing, Presumed Death), spotlight-following puzzles (similar to Children of Mah), and a simple divination puzzle. There are also a number of interaction rooms in the maze, where the player witnesses a cutscene involving one or two other participants, and can sometimes provide their opinion or other interactions.

Each part of the labyrinth is split into four quadrants, which are moved between by entering purple doors at the edge. Surrounding the quadrant are 'impostor squares' - areas that look like more of the maze, but are actually self-contained areas that can't be entered at all, which are used to make the maze look larger and more imposing. 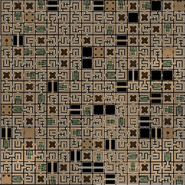 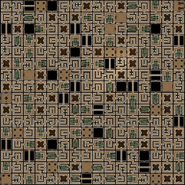 Part of the labyrinth

The end of the first maze
Click an image to enlarge

The solution for the labyrinth is pictured below - blue lines are required diversions to complete puzzles, and orange lines are optional diversions for additional cutscenes. The second maze has two solutions; only one is shown. 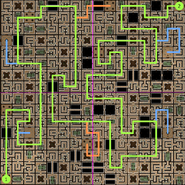 The solution to the first maze 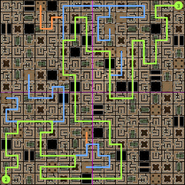 The solution to the second maze
Click an image to enlarge
Retrieved from "https://runescape.fandom.com/wiki/Sliske%27s_Labyrinth?oldid=24923964"
Community content is available under CC-BY-SA unless otherwise noted.