Sliske's lair is a large cave complex beneath south-eastern Morytania where the Mahjarrat Sliske safeguarded the Stone of Jas after finding it. It's accessed through a trapdoor between the Barrows and the Burgh de Rott Woods, just below the Great Vyre Wall. The lair is accessible during Dishonour among Thieves, and also during Kindred Spirits.

The first part of the dungeon consists of several caves with many diverging paths, with a supplied poem providing an effective map to the second part, a heavily guarded cave where wights, shadow clouds and security masks prevent further access. Beyond that is a massive vault door and several side caves, acting as the final barrier before the vault with the Stone of Jas itself.

The many paths in the first part of the cave

Sliske's hidden room with his findings on the soul, along with the Shadow Focus 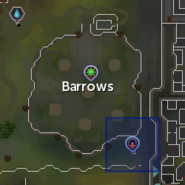 Sliske's lair, southeast of Barrows
Click an image to enlarge
Retrieved from "https://runescape.fandom.com/wiki/Sliske%27s_lair?oldid=24923849"
Community content is available under CC-BY-SA unless otherwise noted.