A man in a jester's costume. 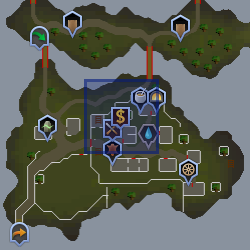 Slug Hemligssen is a spy working for King Gjuki Sorvott IV of Jatizso and is part of The Fremennik Isles quest. Slug is dressed up as a jester, and has been trying to get information out of Mawnis Burowgar. Whilst trying to amuse him, he broke his arm whilst juggling, and so has failed since. He hasn't been found out yet though.

Interestingly, players are not able to walk through and will have to go around him, should he be in their way at all.

Retrieved from "https://runescape.fandom.com/wiki/Slug_Hemligssen?oldid=24923587"
Community content is available under CC-BY-SA unless otherwise noted.