Start a Wiki
OS
This article is about the non-player character found on Mos Le'Harmless. For other uses, see Smith (disambiguation). 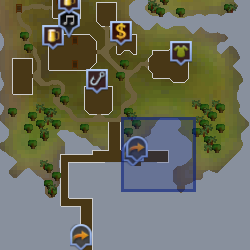 Smithing Smith is a pirate who can be found on the docks of Mos Le'Harmless. Players need to be carrying a book o' piracy or complete Rocking Out to understand what he says.

He will repair a barrelchest anchor for 230,000 coins, after the player completes the quest The Great Brain Robbery. He also sells a variety of weapons.

Smith trades scimitars up to mithril, and hammers. Players can also talk to him to buy Harry's cutlasses, lucky cutlasses, and rapiers. He will also tell a story about each cutlass and its owner.

Retrieved from "https://runescape.fandom.com/wiki/Smith?oldid=24562970"
Community content is available under CC-BY-SA unless otherwise noted.