Smoking Kills is a quest in the desert quest series involving yet another of Amascut's evil schemes against you.

Pollnivneach has a new inhabitant whose name is not Ali (or any variant of Ali, curiously enough). Who could this mysterious stranger be, and how did her sister end up trapped in a dungeon filled with Slayer monsters?

Do you dare to venture into the depths beneath Pollnivneach, where unknown dangers await amid smoke and screaming? The perils will be great, but, when rescuing a damsel in distress, the act should be reward enough...

Speak to Sumona in the house marked by the Quest icon in north Pollnivneach, south-east of the Rug Merchant. She tells you that her sister, Jesmona, has been caught by a monster and trapped under the well in the centre of the town. She asks for your help; accept. Equip a Catspeak amulet and attempt to enter the well. When you try to climb down the well, a cat called "Ali Cat" stops you in a cutscene.

Ali Cat warns you about the dangers of the well, which require wearing earmuffs and a face mask at the same time. Ali Cat tells you to find a dead Slayer master called Catolax and have a talk with him to learn how to combine these items. The cat gives you hints that he is buried at the ruins of Ullek, east of the Agility Pyramid.

Over the desert and through the swamp

Items needed: Amulet of ghostspeak, amulet of catspeak, and cat (or kitten)
Items recommended: Rope for shortcut, if Dealing with Scabaras has not been completed

Either take the magic carpet to Sophanem (or Nardah), or walk to the Agility Pyramid. Alternatively, use the Menaphos lodestone and exit east via Sophanem if Contact! has been completed. Go eastmost from the Pyramid (reaching the sea), and you will find the entrance of a swamp. Open the world map in advance and make sure you know where you are going.

Be aware of the locusts, scabarites, and crocodiles here. Turn on the Protect from Melee prayer, if necessary.

Make your way to the north-west part of the swamp, climb over the pillar and go up the stairs, and arrive at a plateau with the lead and assistant archaeologists and a water source.

If you haven't before, optionally go west, climb over a small rock wall, and use your rope on a piece of rock jutting out over the edge (watch out for the level 74 mummies). This will make getting here in the future much easier. (Climbing the rope requires level 40 Agility.)

Walk through the pass north of the archaeologists. Be careful of the level 70 skeletons and the level 67 Dried zombie. (You can refill your waterskins here if you wish.) Search the first sealed door to the west to enter the dungeon. 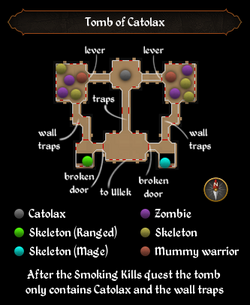 You are in the Tomb of Catolax with a few doors and traps. Talk to your cat and it will tell you that Sumona is evil. With your cat out, search the "holey wall" on either side of the room; one leads to the skeleton ranger side, the other the skeleton mages (refer to map). After a short conversation with your cat, it tells you "some special advice from special sources". Enter either room.

Turn off auto-retaliate, and run to break down the broken door. A pickaxe is required to break the door, but ones on your tool belt will work. Protect from Ranged/Magic is suggested to stop the damage from the low level skeletons. Once you have broken down the door, run behind it, but do not run any further – there are traps!

After you've destroyed the door, do not walk into the room yet. Traps on the walls can hit 1300 life points, so disarming the traps first would be a great idea. On the wall of one side of the corridor before each set of traps is a rectangular switch. Searching the wall (not the odd markings) temporarily disables the traps. The message in the chat box is "With a subtle grinding sound, a hidden mechanism operates just ahead of you. You'd best make your move now."

Once you have passed two sets of traps, open the door at the end of the hall and enter the room. The room has two low level zombies and skeletons. They have varied combat levels, but neither is a serious threat. They have 450 life points, so a few abilities should kill them regardless of style.

Once you've killed the zombies and skeletons, start searching the tombs in the walls. A level 77 Mummy warrior will climb out of the central tomb. The zombies and skeletons respawn fairly quickly. If you find it difficult to keep all four dead at one time, try to either use their weaknesses against them or area abilities such as Ricochet when they are grouped together. The Mummy warrior does not awaken unless all four are dead simultaneously and unless you turn off all protection prayers. He's not much of a threat to those with higher combat levels.

Kill the Mummy warrior and pick up the key—it will either be a Magic path key or a Ranged path key, depending on which path was chosen. If you are in a group they will not drop the keys. Now, use the key to open the door, and once inside, pull the lever. Walk back out to the centre again. You will not set off traps on this side any more after you have pulled the lever, and the skeletons will not rise and attack you.

If you did the ranged side, now it's time to do the mage side or vice versa. Don't forget to disarm the traps in the second room! Once you've pulled the levers on both sides, the traps in the centre pathway are disabled too. Go back to the centre and walk over the disabled traps. With the traps, clicking "Pass" or "Search" should tell you that they're disabled. Walking over them is all you need to do.

After you pass the traps, you will reach the dead slayer master Catolax. Equip your Ghostspeak amulet, and talk to him. You have a "momentary insight, from a source that is completely unknown" and then know how to combine a face mask with a pair of earmuffs.

The banshees in the well

Go to the bank (the nearest being in Nardah), get your supplies, and make your way back to the well in Pollnivneach. If you have not made it already, take your earmuffs and use them with your face mask to get a new item, the masked earmuffs. Put on your masked earmuffs, and go down the well into the Pollnivneach Slayer Dungeon.

Head north, and kill a level 91 Mighty banshee to get a Banshee voice. If you don't get it the first time, keep trying as it is not a rare drop. The Mighty banshees appear to use a magic-based melee attack and they are weak to bolts. They are easily safespotted if you attack one, then run back south along the corridor, as they will not go the full length along it. Use protection prayers if needed.

Use the Banshee voice on the glowing red, wavering mystic barrier directly to the north.

You see a cutscene showing Jesmona, the damsel in distress, level 81 Insectoid assassins, and a level 94 Banshee mistress. The Banshee mistress will attack you as soon as the cutscene ends, so be sure to heal if needed and turn on protection prayers.

The Banshee mistress will frequently sound an acoustic attack, which deals 20% of maximum life point damage and knock you down. A lot of good food, preferably monkfish or above, is needed. You can also bring a combat familiar here. She is weak to bolts, so a crossbow is highly recommended, followed by any other ranged weapon.

The mistress mainly uses melee, but she also casts Water Blast at a distance, so using the Protect from Melee prayer for the first half of the fight is suggested. She calls the assassins to help her with rapid ranged attacks when she has less than half health.

If you die when fighting the mistress, you will be able to go back to your gravestone and retrieve your items. Your gravestone will spawn outside of the well, so getting to your lost items isn't such a big problem, however, you will have to kill another Mighty banshee to obtain the Banshee voice again. If the mistress dies at the same time, you don't need to fight her again.

Although the room has few safe spots, if you have a high mage level, don't be put off maging as it is quite possible.

After you kill the mistress, you see a short cutsene of Jesmona being visibly angry before teleporting away, and Catolax then speaks to you. You do not need your Ghostspeak amulet to understand him on this occasion.

Return and report your victory to Sumona in Pollnivneach. 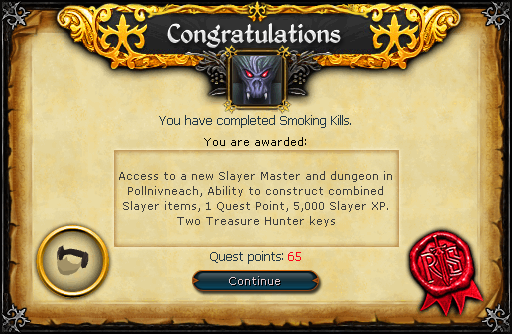 Completion of Smoking Kills is required for the following:

Retrieved from "https://runescape.fandom.com/wiki/Smoking_Kills?oldid=24924883"
Community content is available under CC-BY-SA unless otherwise noted.