The food merchant of Ape Atoll. 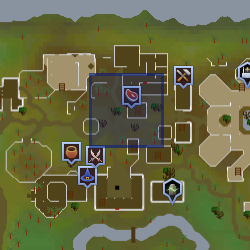 Solihib runs Solihib's Food Stall in the middle of Marim, Ape Atoll. Monkey Madness is required to access him.

If the player attempts to talk or trade with him without holding a monkey greegree, a ninja monkey guard would appear and arrest the player, throwing them in jail. However, if the player is quick enough, they could hold the greegree before the guard reach them, and the guard would simply vanish.

Retrieved from "https://runescape.fandom.com/wiki/Solihib?oldid=24563672"
Community content is available under CC-BY-SA unless otherwise noted.