Solus Dellagar is an extremely dangerous criminal and mass murderer and, along with individuals such as Mother Mallum, Wizard Grayzag or Lord Sulla, one of the most dangerous characters the Temple Knights have dealt with. His past actions have earnt him the titles of Solus Darkheart, the Murder-Mage, Mad Solus and Stealthy Pete. Solus is a very powerful and arguably insane wizard and experienced user of Ancient Magicks, able to vanquish multiple enemies at once with seemingly no trouble at all. He is also capable of straddling through "slow teleportation", allowing him to be in two places at once while being invisible in both.

Solus is power-hungry, sadistic and cruel to the point that even fellow Zamorakians, such as Lord Daquarius, current Lord of the Kinshra, and a researcher of the Zamorakian Magical Institute, shun him and refuse to serve as his allies, with the former stating that neither he nor the Kinshra, nor anyone else, would be friends with 'that creature', and the latter wishing that Solus be disposed of, even bargaining information with the Temple Knights to do so, due to Solus having stolen a large degree of his research into various subjects as well as all of his money. Daquarius has stated that Solus is not a Zamorakian, worshipping nothing but his own selfish ambitions. Sir Tiffy Cashien describes him as 'one of the most dangerous men on the planet', 'extremely adept at magic' and 'quite prepared to use that magic at a moment's notice, because he is quite, quite mad.'

Solus Dellagar is fought during Wanted!, a quest which revolves around chasing him down for the Temple Knights in order to join their ranks. During the final boss fight with him, he is exhausted and unable to use magic, thus resorting to bashing you with his staff. As such, he is very weak and easy to defeat.

Solus Dellagar is fight-able as a class H boss monster in the Dominion Tower minigame if the player has completed the quest Wanted!.

Being dangerous and elusive, Solus' history remains largely unknown. The Temple Knights suspect that he was born in or in the vicinity of East Ardougne. How he acquired his great magical skill remains a mystery, although it may be the result of hard work, for Lord Daquarius remarks that Solus is very ambitious.

In 154 of the Fifth Age, Solus joined the Mahjarrat Lucien in a massive attack on Varrock. Lucien, aided by hordes of undead, sought to obtain the Shield of Arrav, a very powerful artefact his cousin Zemouregal claimed was able to control and subjugate races to one's will. The Varrock military, however, was armed with large amounts of runestones and repelled the attack, which led to the disappearance of Solus.

He reappeared in the year 163, when he was amongst an army of Kinshra, led by Lord Shadwell, in a mission to the Ghost Town; a small village west of Varrock where the great Zarosian fortress of Paddewa once stood. Exactly why the Kinshra operated in the town, which was mostly abandoned ruins, although it was, apparently, inhabited, remains unknown. However, it appears that Solus turned against his Zamorakian allies when he, for no apparent reason, began to massacre the town's civilians. By the time he had killed around eight hundred people, the White and Temple Knights arrived from Falador to stop him. However, Solus simply continued to attack and killed an equal number of knights, even attacking the Kinshra and murdering Lord Shadwell. Eventually, he was apprehended by the Temple Knights and, since Sir Amik Varze - leader of the White Knights - was strictly against killing a defenceless man, they decided to banish Solus from Asgarnia. This massacre of approximately 1600 people would become known as the Edgeville Incident (seeing that the Ghost Town was reconstructed and named "Edgeville" by King Roald Remanis III of Misthalin in 169), and it is how Solus earnt his title of murder-mage.

Return from Exile and Defeat

The following takes place during Wanted!.

Much of what took place during Solus' exile is unknown. The Temple Knights meanwhile experimented with the process of slow teleportation, which would allow their agents to be in two places at once and not be visible in both. However, experiments were ceased when the test subjects suffered severe mental damage such as increased aggressiveness and hallucinations and were driven insane. Senior Mystical Researcher Savant implies that there was a leak within the headquarters and someone else found out about their research - quite possibly Solus. Regardless, he managed to elude the authorities for long due to his incredible magical abilities, as he had enough skill to be able to slow down the process of teleportation enough that he was literally in three places at once - the point from which he teleported, the Abyss and also the destination of his teleport spell. This would effectively make him the only human known to be fully capable of dimensional straddling, be it due to having stolen the Temple Knights' research or not.

In 169, Solus returned from his exile and visited the new Lord of the Kinshra, Daquarius, in the Black Knights' Base. Daquarius demanded that he get out, to which Solus cheerfully killed two knights and gravely wounded Daquarius to inform the lord he had become Daquarius' new master, before leaving. He also visited a mage of Zamorak researching for the ZMI and took his money and research, scaring the man to beyond panic.

Feel the wrath of my powerful magic!
Solus Dellagar makes a threat.

Subsequently, a new recruit who had joined the Temple Knights but was then to save the day in a situation of crisis due to not having followed standard recruitment protocol was tasked by Sir Amik Varze to apprehend Solus Dellagar and defeat him, for he had returned from his exile. Armed with a Temple Knight commorb, they set off to Daquarius and, after threatening to kill his men, he revealed that Solus had left a piece of fur behind. They then visited the Zamorakian researcher and bought information from him with some rune essence; he revealed Solus had teleported to the east. The recruit concluded him to have gone to Canifis and headed there. Savant concluded Solus was using slow teleportation and knocked him out of the dimensional straddle, forcing him to appear in Canifis. However, he teleported away again, but left an item between dimensions Savant was able to retrieve, thus enabling the recruit to track him down again.

After several encounters, which included Solus teleporting his adversary to Camelot, disguising himself as a damsel in distress and summoning a Black Knight to kill them, Solus eventually cast an exceptionally powerful Flames of Zamorak spell, nearly incinerating the recruit. Thanks to Savant's intervention, however, they survived. Solus was tracked down in the rune essence mine and Savant quickly prevented him from straddling again before he could flee. She summoned a large squad of Temple Archers, to arrest him, but he simply froze them to death with a single spell.

However, the spell had drained his powers significantly and the recruit, seizing the opportunity, attacked. Without magical power, the murder-mage could only bash them with his staff in retaliation and was defeated after a short skirmish. He was then taken into custody for questioning by the Temple Knights, and his hat was taken from him as proof of his demise, which the White Knights soon learnt of. 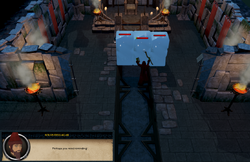 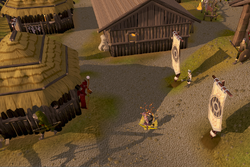 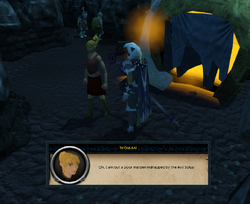 Solus pretends to be a kidnapped woman. 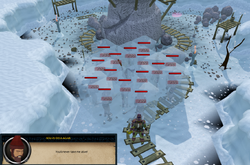