The emissary of Zaros. 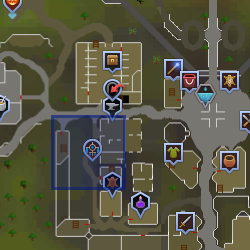 Soran is the mysterious, cloaked emissary of Zaros. He can be found in south-west Varrock wielding a glowing ancient staff. According to Soran, if one chooses to follow Zaros, Zaros will act as a "dauntless, all-knowing protector". He will give various tasks to complete in addition to a banner of Zaros and a Book of the Gods. The title "[Name] of Zaros" may be activated through this emissary.

Soran was also found on the north-east part of Tuska, during the Tuska Comes world event. He was only visible whilst wearing the ring of visibility or after Fate of the Gods, if you have Sliske's gift.

Soran was featured in the first clue of the 2013 Festive Cryptic Clue Fest.

Retrieved from "https://runescape.fandom.com/wiki/Soran,_Emissary_of_Zaros?oldid=24564896"
Community content is available under CC-BY-SA unless otherwise noted.