The Soul Altar is a Runecrafting altar found in the Imperial district in Menaphos, used to craft soul runes from pure essence at level 90 Runecrafting (or lower with a temporary boost). Completion of the master quest 'Phite Club and rank 9 Reputation overall is required to access the altar. The cats Tefimhet and Ka can also be found here.

The Soul Altar is located beneath the water fountain at the westernmost point of the Imperial district. Before entering the altar for the first time, the water must be drained, which can be done by clicking the "Fill" option with a soul talisman in your inventory, allowing access to the stairs and underground passage which lead to the altar.

Players with 6 reputation in the Imperial district can access the bank chest near the entrance of the Grand library. The Imperial district teleport tablet places the player just a few squares away from the chest, allowing players to use the two in conjunction to speedily charge the altar.

The fairy ring code CKQ is located near the fountain entrance, allowing players to bank in Zanaris. When used in conjunction with TokKul-Zo, players can also bank in TzHaar City. Additionally, if using the wilderness sword teleport, players can bank in Edgeville and then run to the Grand Exchange fairy ring to return to the altar. If the player has portable fairy rings, it is recommended to use those to return to the Soul Altar from any bank for an altar-charging run. Since the demonic skull is not needed when charging the altar, the portable fairy rings may be stored in the pocket slot. Activating it can be keybound; activating the bind opens the fairy ring interface instantly, saving a great deal of time compared to running to fairy rings, even ones close to banks such as the Fight Cave or Max Guild portal.

The mechanics of crafting soul runes differ greatly from those in standard Runecrafting process. The altar must first be charged with pure essence by putting pure essence into the charger; 4 essence will generate 1 charge, giving 10 Runecrafting experience and taking 6 seconds to create. 1.25 charges can be used to create 1 soul rune, meaning it takes 5 essence to make 1 rune, giving 220 experience per charge, or 275 per rune crafted. The charger has a capacity of 100 essence, after which they must be converted into charges; the altar can hold up to 100 charges, after which they must be crafted into runes. You do not need 90 Runecrafting to charge the obelisk - only to craft the runes. This should be kept in mind if boosting.

To maximise the experience gained, players should use either wicked hood teleports or fairy rings to charge the altar, and use the Abyss in conjunction with the demonic skull for the Runecrafting trip, in which the runes are actually created. With both of these bonuses, a maximum of 77,000 experience can be gained by binding a fully charged altar into at least 80 soul runes; if you bring Decorated runecrafting urns this amount can be brought up to around 90,000 xp.

The ideal setup for making soul runes utilises the infinity ethereal outfit, the Wilderness sword, the set reward from Sliske's Endgame, and a demonic skull. The ethereal outfit is used for its multiple set benefits; in addition to weight reduction, the head acts as a wicked hood, the chest stores up to 12 pure essence, pouches have a 50% chance of not degrading (increased to 75% with Sliske's set), and bonus XP will be awarded if the player owns the master runecrafter robes, even if the set is in the bank or stored in a player-owned house. The Wilderness sword is used to provide a teleport to Edgeville, and may be placed on the action bar; this allows players to quickly travel to the Abyss, as well providing a one-key teleport should one see a PKer. The set reward from Sliske's Endgame will grant the player additional experience in Runecrafting every five minutes by siphoning the manifested knowledge that appears. Portable fairy rings can be stored in the pocket slot in place of the demonic skull if using Fairy rings to return to the Soul Altar. The inventory should contain filled pouches, and the remaining inventory slots as well as the inventory of your beast of burden should be filled with pure essence.

For those wishing to use the soul altar below the required level of 90, it's possible to boost from as low as level 83 using an advanced pulse core. When using a one-time boost such as a god banner, it's highly recommended to charge the altar before boosting, as there is no requirement to do so. This way, one only needs to boost right before their run, or in the case of a god banner, save 10 minutes on the 30 minute boost duration.

Players hoping to take advantage of Oldak's Runecrafting boost can charge the altar and then head to Dorgesh-Kaan with a restore potion get a boost (or reduction) by talking to Oldak and then selecting the "what have you discovered?" option, drinking the potion to restore your Runecrafting level should he lower it. If you plan on boosting through Oldak, the Wilderness sword teleport to Edgeville is extremely useful in getting through the abyss to the soul altar before it drops below 90.

A soul tiara can be created at the altar by using a soul talisman on a tiara in the player's inventory. The player must use the tiara on the altar. Doing so will earn 55 Runecrafting experience. 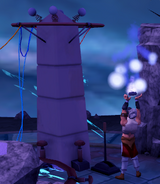 Charging the altar with pure essence
Click an image to enlarge
Retrieved from "https://runescape.fandom.com/wiki/Soul_Altar?oldid=24309071"
Community content is available under CC-BY-SA unless otherwise noted.