The Soul obelisk is an artefact used "to harvest the souls of the weak and unready." It is featured in the Soul Wars minigame.

In the minigame, players try to capture the soul obelisk. Once the obelisk is captured, players may use the Soul fragments on the obelisk in order to lower the enemy avatar's Slayer level.

In the quest Nomad's Requiem, it is confirmed that Nomad created the soul obelisk and all soul shards used on it are transferred to his 'throne' which siphons their power into him, causing him to gain tremendous power.

In the quest Nomad's Elegy, Nomad brings the Soul Obelisk and the souls absorbed by it with him to The Underworld. He uses it to siphon power and act as a power source of his horrific construction Gielinor. After Gielinor's destruction and Nomad's defeat, the soul obelisk somehow manages to get back to the real world to the place it used to be.

The obelisk is located at the centre of the Soul Wars island. 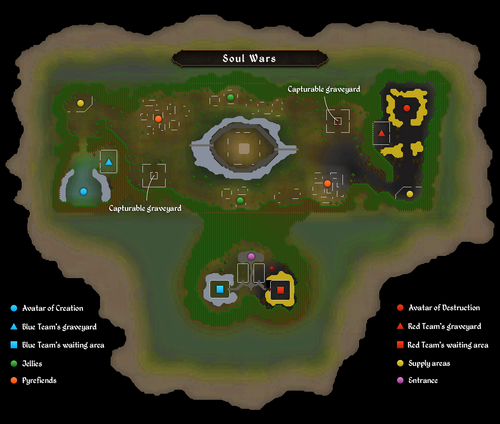 Below is the quote mentioning the obelisk:

Retrieved from "https://runescape.fandom.com/wiki/Soul_obelisk_(Soul_Wars)?oldid=20661531"
Community content is available under CC-BY-SA unless otherwise noted.