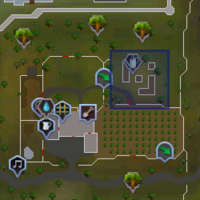 South Falador Teleport is a Lunar magic spell released with Livid Farms on 4 April 2011, and will teleport the caster near the Falador herb patch near the southern gate. Previously, this spell teleported the player to Falador's southern gate. It can be unlocked at the Livid Farm upon reaching 35,000 produce points. As with all Lunar spells, the quest Lunar Diplomacy must be completed to cast this spell.

This spell is often not used due to the captain's log, Explorer's ring 3, and Falador lodestone offering unlimited free teleportation to the nearby area.

Remember, you cannot use Ancient Magicks or Standard spells if you are using Lunar Spells.

Retrieved from "https://runescape.fandom.com/wiki/South_Falador_Teleport?oldid=20924529"
Community content is available under CC-BY-SA unless otherwise noted.