Start a Wiki
This article is about the pet. For the NPC found in The Poison Arrow pub, see Sparky (NPC).
[view] • [talk]

Sparky is the skilling pet obtainable from Ranged. It is unlocked by using Sparky pet. 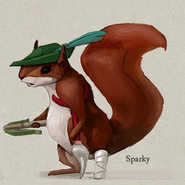 Concept art for Sparky
Click an image to enlarge

Retrieved from "https://runescape.fandom.com/wiki/Sparky?oldid=23388058"
Community content is available under CC-BY-SA unless otherwise noted.