Has a very exotic aroma about him. 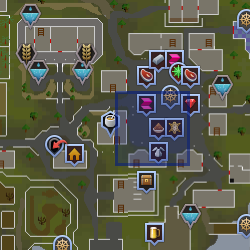 The spice seller is a non-player character who runs the spice stall in the south-west corner of the Ardougne marketplace in East Ardougne. He guards his spice stall in the south-west corner of the market square, between the Fur stall and the Silk stall. If he sees a player trying to steal from his stall, he'll stop them. He cannot be talked to or traded with for six minutes after a player has stolen from the spice stall unless the player has an activated vial of stench in their inventory when they stole from the stall.

Retrieved from "https://runescape.fandom.com/wiki/Spice_seller?oldid=24562342"
Community content is available under CC-BY-SA unless otherwise noted.