A spinning wheel is a piece of Crafting equipment used to spin fibres into strings. Spinning wheels are marked on the map by this symbol:

The following table shows what fibres can be spun into what strings using a spinning wheel:

Locations of spinning wheels include:

The most commonly used spinning wheels are the ones located in Seers' Village, Lumbridge Castle, Burthorpe, and Prifddinas/Lletya, mostly for their proximity to something that can be spun, i.e. flax or sheep's wool.

The elven village of Lletya has the closest flax field to a bank. After banking large amounts of flax, the player may then choose to run back and forth between the spinning wheel on the north-western part of the town, in the same building as the Lletya Seamstress.

Alternately, the flax field in Taverley, is just south of the crafting section of Burthorpe. This is helpful for players who don't meet the requirements to access Lletya.

Other choices are Prifddinas, Seers' Village and the Tree Gnome Stronghold, due to the close distance between the spinning wheels and banks. Also, these wheels are located near flax fields.

Best spinning wheel to use

There has been much dispute among crafters as to which spinning wheel is the best in RuneScape. Here is a list of advantages and disadvantages of the most useful wheels:

A player using a spinning wheel 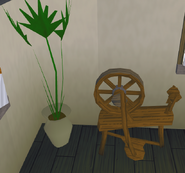 The spinning wheel in the Crafting Guild 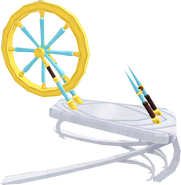 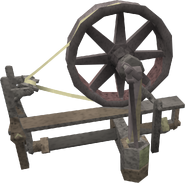 A spinning wheel located in Daemonheim
Click an image to enlarge

Retrieved from "https://runescape.fandom.com/wiki/Spinning_wheel?oldid=21697522"
Community content is available under CC-BY-SA unless otherwise noted.