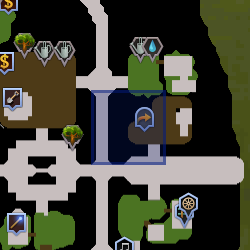 The Spirit Tree in Prifddinas is a huge spirit tree that has grown from the bottom of the crater that Prifddinas is situated over. She can be found in the Crwys district of the city, next to Glouron. Although all players can teleport from her, before they can teleport to her, they must have learned how to grow three spirit trees at once from Glouron, which requires level 89 Farming and completion of Prisoner of Glouphrie.

If talked to, she requests that players grow spirit trees in Brimhaven, Port Sarim and Etceteria, and says that Glouron will reward them if they do so. If players choose to fulfil her request, once all three trees are fully grown (and their health has been checked), Glouron will award a farming XP lamp worth 50,000 experience.

According to Glouron, she has been growing since the original incarnation of Prifddinas was built in the First Age, and has remained there ever since. While the city was reverted to crystal seed, she could only look down at the elf camp on the crater below her, and not talk to anyone due to her immense height. She was also cut off from the Anima Mundi, and as such could not talk to the other spirit trees.[1] Now that the city is restored and she has people to talk to, she has garnered a reputation for being extremely talkative, and is once again part of the Anima Mundi.[2]

Retrieved from "https://runescape.fandom.com/wiki/Spirit_Tree_(Prifddinas)?oldid=24565177"
Community content is available under CC-BY-SA unless otherwise noted.