Spirit of Summer is a quest taking place entirely in the Wilderness. It involves the spirit of a young girl, Summer, who seems to be unable to move on to the Afterlife.

The ghost of a small girl has appeared at the farm ruins in the Wilderness. There seems to be something she wants, but she is too weak to communicate properly. Can you figure out what needs to be done?

You can start the quest by speaking to the Spirit NE of Varrock outside the wall, just outside the wilderness wall. You can't understand it, even when wielding an Amulet of Ghostspeak, though you will get the phrase "...with...", which the player interprets as a signal to come with the Spirit.

The Spirit will teleport you to a safe version of the Wilderness. Follow her. As you walk toward the Spirit, she will disappear and reappear a short ways away. Continue to walk toward her until you get a message: You feel as if something is pulling at your consciousness. Do you allow it to drag you away? Agree to enter the Spirit Realm.

You see a man (later known as Erik Bonde) who traps the girl in 5 rings. Equip the Ghostspeak amulet and talk to the man.

He doesn't speak but rather answers with an emote. The emote responses are different for each player. Use the Think emote to get him to repeat his emote.

Each time the correct emote is performed, one of the 5 rings around the girl will disappear. If you respond with an incorrect emote, all the rings reappear, and you must start over.

After all 5 rings are gone, speak to the Spirit girl. You will find her very hard to understand. If you forgot or otherwise did not bring your ghostspeak amulet, do not go back to the portal by the farm as it will be rendered inoperative. You can come back any time by meeting her where you first followed her, instead. She wants to meet you at a village near the mountains to the West. Continue speaking to her and she will take you to the village.

Items needed: Below are the locations for the items you will need that can be found around the ruins in the real world, but it is likely faster to buy all the items at the Grand Exchange.

When in the real world, be sure to grab the mushrooms on the hollowed log to the west of the farming patch near the statue. You will need them later.

Speak to the Spirit when you have the items above. She can be found just a little east of the flower patch and directly north of the anvil.

Talk to the Spirit again. She will again not talk properly and mention something like "being stuck", "a beast", "washing something" and "a barrel" (indicating the barrel located next to her).

The Spirit now wants something to eat. If you have not already done so, go back to the real world and west of the farming patch. Near the statue, pick the hollow log to get Button mushrooms (this requires three empty inventory spaces, although the mushrooms are not needed for the quest and can be dropped once picked). This will cause mushrooms to grow in the Spirit realm. Return to the Spirit realm where a cut scene ensues. The girl will eat the mushrooms.

If you already picked up the mushrooms earlier, the cut scene will play after the Spirit washes her face.

The girl then wants you to get some clothes out of the wardrobe she is standing near. Back in the real world, use a plank on the wardrobe with another plank and 4 steel nails (requires level 40 Construction). This will break open the wardrobe in the Spirit realm. Go back to the Spirit world and you will see her using the wardrobe.

Planks can be found all around the farm. Hammer and nail spawns are in the buildings southwest and southeast of the farming patch.

Next, she wants to retrieve her doll which is buried under the diseased Limpwurt plant. Once again, go back to the real world. Rake up the weeds, then search the nearby crates for a limpwurt seed (or bring your own).

Plant and wait for it to grow. It will take around 15–25 minutes. The patch won't become diseased, so there is no need to water it, and don't be afraid to do something else while it grows.

Once it is fully grown, the plant in the Spirit realm will disappear. Go back to the Spirit world, where during the cutscene, the Spirit girl will get her doll. Make sure you DON'T pick the limpwurt plant, otherwise you will have to grow one all over again! The plant cannot be picked after the doll is retrieved.

Bones and skulls spawn in the normal realm throughout the farm (where you find the father) or just outside it (use the portal for travelling between the two realms). A skull spawn is also found just east of the farm in the Spirit world. You won't be able to see or pick up the skull until after the limpwurt plant has fully grown and you've talked to Summer in the Spirit realm.

After the Spirit girl finds her doll, she will begin to speak normally and introduce herself as Summer. She will ask you to go with her to the farm. You will have the option of teleporting there if you decide to go immediately.

Once you are there, talk to Summer. She will tell you about an altar that you need to activate to get rid of the Spirit Beast. Before following her down the steps you should get the skull and bones. You will be led to a ladder (in a building on the east side of the farm) which you can climb down to reach the altar.

You need to place offerings on the altar to feed it. Use the skull and bones on the altar. Make sure you do not bury the bones by accident. Summer will tell you that you must use the power of Spirits along with the power of the discs in order to trap the Spirit Beast.

If you place the skull and bones on the altar in the real world, they will turn into ashes.

The power of Spirits and discs

If you are experiencing lag, you will not be able to dismiss your familiar quick enough to avoid being devoured. Changing your summoning left-click option to "Dismiss" is recommended in any case.

It will be very helpful to have your familiar interface open. From here, you will be able to right click the Dismiss button and do "Dismiss Now" to instantly dismiss your familiar.

Still in the Spirit world, go up to the surface. In the north of the farm ruins is a level 419 Spirit Beast, which you should avoid. East of the beast is a disc with a picture of a Spirit wolf on it. Stand on the north side of the disc (outside) and summon your Spirit Wolf to lure the Spirit Beast. Your familiar needs to be on the disc. Wherever the beast is you should stand on the opposite side of the disc.

Due to a bug, the Spirit Beast may disappear while you are doing this part. If this happens, log out and back in, then re-enter the Spirit realm to respawn it.

The beast will approach the first disc from the west. Right before the beast steps onto the disc, and your familiar is on the disc, quickly dismiss the Spirit Wolf. If you are successful, a short cutscene will show a new disc appearing just to the west of the first disc. If the beast devours your familiar quickly summon another and then immediately dismiss it again (make sure you have dismiss set as the left click option); keep doing this until you are successful. The beast does not need to be in the centre of the disk - on top of the disk is enough.

Repeat this with the new disc, only this time, summon a Desert Wyrm. Again a cutscene will show a new disc appearing if you are successful. Summon a Spirit scorpion for the third disc, located at the north-west corner of the farm which is quite a distance from the other two disks. Remember, your familiar needs to be ON the disc when it is dismissed, or it will not work.

In each case, you must dismiss your familiar as soon as the beast is on the disc. Take care because if your familiar is not dismissed fast enough, the beast will devour it, requiring you to get another pouch. It may be a good idea to get several of each pouch beforehand. Therefore, it is helpful to try to position yourself between the beast and your familiar.

The Spirit Beast won't attack you, so food isn't necessary, but if you get too close to him, you will be hit for low damage (30-80 life points).

Use the Dismiss Now button available by right clicking the Dismiss button from the summoning interface to dismiss your familiar more quickly.
The beast will approach from the west for first disc, the east on the second disc, and from the north on the third disc. Keep that in mind as you "place" your familiar in a safe area (when the beast arrives from the west, put your familiar to the east of the disc). If you leave and the beast disappears, when you summon your familiar again, the beast will come to the disc from the same direction. Don't forget however, your familiar needs to be ON the disc.
Calling a familiar confuses the beast and causes it to start wandering around in search of the familiar. Repeating the call a few times gives time to position the familiar correctly with respect to the beast.
The shock is delivered based on the tiles, not the disc graphic. You should dismiss your familiar once the beast is standing on at least one tile that includes part of the disc. As long as it's close enough to devour the familiar, it should also be close enough to shock. It may not walk further than the edge of the disc.
On occasion, the moment you dismiss the familiar, the Beast will devour it. As long as it is shocked, this doesn't matter.
As you approach the beast, it will start to follow you, but always stop at a distance of about 5-7 tiles. This can be used to your advantage. If you get too close, a message will pop-up saying "The Beast is not interested in fighting you and shoves you away." and you will take minor damage (30-80 life points).

After the Beast has had three shocks from the 3 different familiars, three Spirits (Meranek Thanatos, Erik Bonde, and Jallek Lenkin) appear and seal it at the last disc.

The Spirit Beast has broken free!

Talk to one of the Spirits that have trapped the beast, they will explain that by your presence in the Spirit Realm, you have only made the beast stronger. Summer is more appreciative of your help, and gives you her mother's ring. The Beast will then escape, and the screen will fade to white... 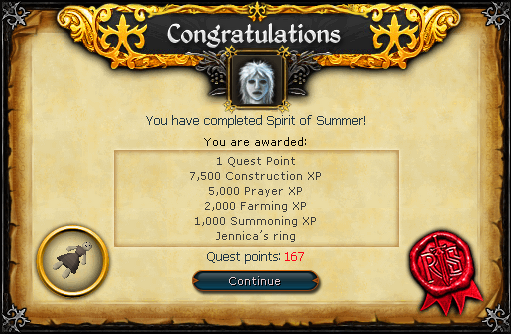 Completion of Spirit of Summer is required for the following: