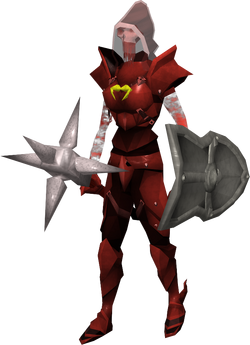 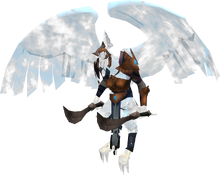 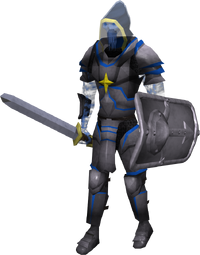 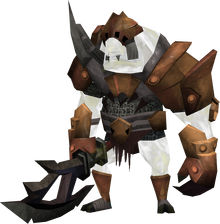 The Spiritual warrior is a powerful melee user inhabiting God Wars Dungeon that can easily kill low-level players. Protect from Melee is not recommended for high-leveled players, as a large portion of their combat level consists of defence and life points. There are four types of Spiritual warriors: Saradominist, Zamorakian, Bandosian, and Armadylean.

The Armadylean spiritual warriors cannot be attacked with melee. Zamorakian warriors wear what appears to be dragon armour, a iron kiteshield, and an anger maul from the Soul's Bane quest. Saradomin warriors wear a kind of steel-Saradomin armour and wield a sword similar in appearance to Vesta's longsword.

Spiritual warriors frequently drop adamant equipment and rune equipment, so it is advisable to bring runes for High Level Alchemy.

There are four types of Spiritual warriors:

Spiritual warriors are fairly easy to kill. They have very high defence and health for their level, and will rarely hit over 100. They do however use only melee attacks, which may either be slashing or crushing depending on the warrior. Here are several areas to kill them and what you should do if you kill them there:

The main room only contains Saradomin spiritual warriors. As most Zamorakian minions are at the northern part of the main area, it would be best to kill them there. Most of the warriors are busy fighting, and it is uncommon to find idle warriors around. This does save food resources, but Saradomin, Armadyl and Zamorakian protection would be recommended.

This area contains numerous spawns of Spiritual Warriors. However, players should take notice of the prayer drain, and always drink a sip once you get inside. The best place to kill them is right outside the boss room, as many Spiritual warriors are wandering around. You should be aware of the Spiritual mages as higher levels may misclick and be unable to damage them. This is, however, one of the best areas to slay Spiritual warriors when a player is on a task.

This area contains Spiritual warriors with high defence against melee and ranged attacks. Free prayer recharges can be found in almost every world due to the popularity of their general. These warriors barely fight any Zamorakian, aside from the occasional vampyres, so unless you can camp them carefully, it is not recommended to kill them.

The spiritual warriors here can only be hit with range, magic or salamander attacks. These warriors are few in number. Unless using magic, it is not recommended to kill them here due to the fact that ranging them takes a long time as warriors, they are strong against rangers.

Retrieved from "https://runescape.fandom.com/wiki/Spiritual_warrior?oldid=23309055"
Community content is available under CC-BY-SA unless otherwise noted.