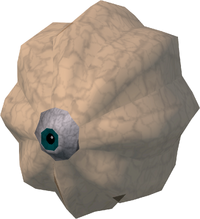 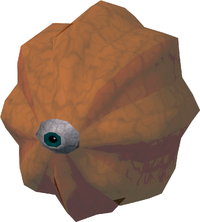 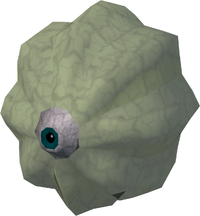 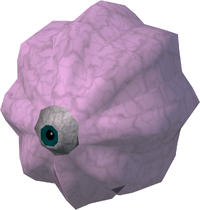 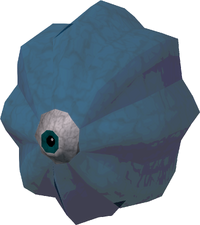 Splatters are monsters in the Pest Control minigame. They are creatures that appear like a giant, wrinkled ball with a single eye in the middle and liquid inside them. They will go towards the fort and detonate, causing big damage to all players, monsters, and objects in the immediate vicinity. This will also happen if they are killed, which is easy since they are often low level and weak defensively. When a splatter "detonates" near another splatter, if the secondary splatters' life points are low enough, the damage may cause a chain reaction, increasing the overall damage.

If the opportunity arises, you can use the splatters sort of like a Void Seal by detonating them near large groups of monsters. This does work on portals. This "attack" is sometimes called "spatter barrage". Also, if you are fast enough you can avoid the detonation by running away when you know they are going to detonate, but haven't started the detonation yet. This is unreliable, however. No prayer protection can defend against their "detonation". Players wearing Dharok's equipment may wish to kill Splatters to lower their health and activate the set effect to do extra damage. Killing them is a higher priority the closer they get to the gates, as their explosions can damage the gates. Splatters will never attack the Void knight, and if killed near it, no damage would be dealt to the Void Knight.

Retrieved from "https://runescape.fandom.com/wiki/Splatter?oldid=17804979"
Community content is available under CC-BY-SA unless otherwise noted.