The apple doesn't fall far from the tree; she looks every bit Turael's daughter. 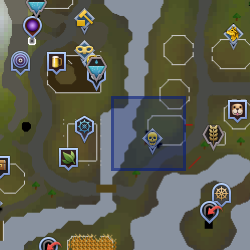 She resides in south Taverley. The easiest way to reach her is to teleport to the Taverley Lodestone and then walk south-east across the bridge. Other options include using the Burthorpe Lodestone, the Troll Invasion Games necklace teleport, and teleporting to the Warriors' Guild with a Combat bracelet.

Unlike other Slayer masters, there is no Slayer or combat level requirement to receive slayer assignments from her. However players must have at least 85 combat to use her due to requirements for the While Guthix Sleeps quest. Additionally, Spria will offer to change a Slayer assignment from another master into a less difficult one. She will only do this once per assignment, and only if the first assignment is not one that she would ordinarily give.

She gives no Slayer points per task – and changing a task with Spria will also mean the player would have to complete another four tasks to start earning points again. If a player changes their task with Spria, their task count will be reset back to zero.

*Many slayer monsters have numerous variants of the monster assigned. This list is not inclusive of all variants. Please check the monster's page for more specific information about the different variants.

Spria's special task is for the player to slay, in a single trip, all of the beasts in Spria's basement. The monsters are:

For Spria, assuming all possible assignments are available, S = 355.

Nederlands
Community content is available under CC-BY-SA unless otherwise noted.
... more about "Spria"
RDF feed
Is members only
No +
Store location
Taverley +
Advertisement