Not to be confused with Build-A-Fayre.
This article is about the 2017 event. For other events, see Spring Fayre.
[view] • [talk]

Spring Fayre was a seasonal event, similar to the Summer Beach Party, that was released on 24 April 2017 and lasted until 5 June 2017.[1] Its release was preceded by a pre-event activity called Build-A-Fayre, which was released on 18 April, where players helped to build the Helter Skelter. The fayre was located in Lumbridge Crater.

Participating in activities required the player to spend fayre attraction tokens, 100 of which were obtained for free each day. More tokens could be bought for Rune Coins in the tickets and tokens stall. All activities gave various amounts of Fayre prize tickets. Activities included:

Agility funhouse was an activity located in south-west corner of the Fayre, next to eastern exit. It functioned similarly to regular agility courses. Each lap cost 10 tokens and awarded Agility experience.

Bucking Baroo was an activity located in north-eastern corner of the Fayre, in which player tried to stay on top of the Yak by using the correct option on the interface (Left or Right), if the player failed to do so, he or she fell down. The correct option was displayed above the arrows. Each match cost 10 tokens and awarded Defence experience.

Candy floss machine was an activity that allowed players to gain Cooking experience and a chance to obtain the candy floss maul. There were 2 machines in the Spring Fayre grounds. The machine cost 2 tokens per experience drop.

The hunt ran for 4 weeks, with a different cosmetic outfit reward each week. If the player does not obtain all pieces of the outfit, then they may buy them using fayre prize tickets in the following weeks.

The Claw-dia Stall was a claw crane game machine located in north-western corner of the Fayre. It awarded a guaranteed prize box which contained at least two items, among which may be prismatic lamps and fallen stars. Each use of the machine cost 50 tokens and the machine may only be operated twice per day. Using this gave 6 tickets.

The Dancing Platform was an activity led by Dixie and Mixie. It was located in south-east corner of the Fayre. It functioned similarly to Serenity posts, players stood on the platforms and attempted to follow the emotes done by the leaders. It awarded Prayer experience and cost 2 tokens per experience drop.

Easter Egg Shy was an activity located in south-eastern corner of the Fayre, in which players attempted to hit Easter eggs with various objects. Those included:

Kristlin provided medium fortune stars in a variety of skills via the cloud of destiny located to the east of the crater. It cost 40 tokens per destiny.

The Helter Skelter stood in the middle of the Fayre grounds, and allowed players to slide down it. It rewarded Constitution experience and cost 10 tokens per ride.

The Hook-a-Duck was an activity located in south-eastern corner of the Fayre. There were various different rods that players could use in this activity which affected the experience they get, and their chances of success. Each successful action cost 1 token and awarded Hunter experience.

The Mighty Zoltan was located slightly east of the Helter Skelter. Operating it awarded one of the 17 mis-fortunes and Divination experience at the cost of 10 tokens per fortune. It was possible to get duplicates.

Pickaxe wanging was an activity located in the north-western corner of the Fayre, in which player tossed a pickaxe towards the rocks. It awarded Mining experience and cost 1 token per experience drop.

Test of strength machine was located at north-western side of Fayre, right beside the north entrance to the crater. Operating the machine awarded Strength experience at the cost of 2 tokens per hit.

Thieving experience was awarded in the form of a medium XP lamp for bringing items to Trixie from a random set list. The list was generated at the cost of 10 tokens. For each new list, another 10 tokens were required. It was possible to buy a new list to replace an old one if the items were not to the player's liking. Trixie was located in the north-west corner of the crater.

Occasionally a Happy Hour occured which allowed players to do most of the activities without using any tokens, gain 10% more experience from activities, but only have a chance at receiving one ticket per successful action rather than the usual six.

As of 4 May 2017, all Happy Hours became automated, following the below schedule (weekends had the same schedule as weekdays).[2] Automated Happy Hours had the following broadcast:

Happy Hour is starting at the Spring Fayre! Gain increased XP and don't spend tokens whilst taking part in activities at the Fayre!

Mod [Name] has started Happy Hour at the Spring Fayre! Gain increased XP and don't spend tokens whilst taking part in activities at the Fayre!

The Spring Fayre had the same Distractions and Diversions portals as the Summer Beach Party:

When a portal became active, Barri announced it in the in-game chat.

Most rewards could be purchased via the three rewards shops by speaking to Nixie, Rixie, and Prezleek during the event. They could also be awarded randomly by participating in the fayre events, which gave the message Whilst playing games at the Fayre you find - <token>. Rewards included cosmetic overrides, emotes, pets and a special title, The Fairest of Them All.

Items here were all sold by Rixie, who was located in the southern end of the Lumbridge Crater, next to the Big Chinchompa portal.

Items here were all sold by Nixie, who could be found just to the north of the stage beside the Bucking Baroo activity.

Items here were sold by Prezleek.

Main article: The Fairest of Them All

On the day of the Spring Fayre's release the event received negative feedback from players due to the limited accessibility of the content. The number of fayre attraction tokens that the player received each day allowed them to participate in the fayre's activities for only a minimal amount of time, and therefore earn a limited number of fayre prize tickets. Players believed that the number of prize tickets gained from using only the free daily attraction tokens was not sufficient to unlock all of the rewards from the event and that it would be necessary to purchase additional attraction tokens using RuneCoins or participate in Happy Hours if they wished to obtain all the rewards.

In response to criticisms from players, the following changes were made on 25 April 2017[3]:

Happy Hours received negative feedback throughout the first few weeks of the event because of the manual work required by Jagex moderators to start them. This resulted in scheduled slots being missed, started late, or started too early. From 4 May 2017, Happy Hours were automatically activated on a schedule.[2]

The event ended on 5 June 2017 with the game update. The three reward shops were immediately removed. The message at sign-in stated You have until the 12th of June before all of your Fayre Tickets and Tokens are cleared up.

Tickets could only be used to obtain the four outfit override pieces from the chinchompa hunt map by right-clicking the map and selecting 'Open Store'.

Many players who were hoping to use their tickets to obtain rewards from the reward shops expressed their views on the RuneScape Forums. There was no warning about the exact time of event ending or that the reward shops would close immediately. Other events allowed a NPC which would remain a week to redeem rewards.

Mod Jam apologised for the way the Ticket and Token cleanup was handled and that Jagex will discuss ways to avoid these issues in future events.[4] 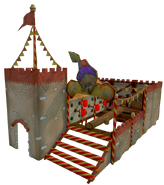 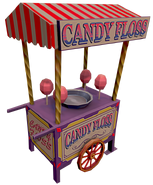 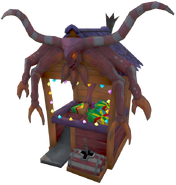 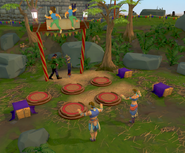 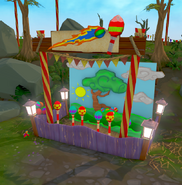 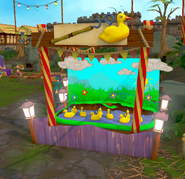 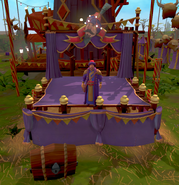 The test of strength machine

The tickets and tokens interface

Retrieved from "https://runescape.fandom.com/wiki/Spring_Fayre_(2017)?oldid=21706853"
Community content is available under CC-BY-SA unless otherwise noted.