He looks like he spends a lot of time outdoor. 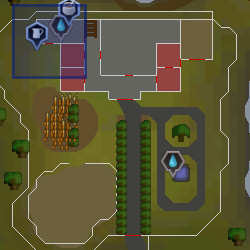 Stanford is the gardener of the Sinclair Mansion. He had an affair with Anna Sinclair, the daughter of his employer Lord Sinclair,[1] but when the relationship ended, she tried to have him fired by destroying the flowers in the garden.[2] Their relationship has continued to be sour since.[3] He has a shed in the garden which contains flypaper.

When Lord Sinclair was murdered, he was convinced Anna was the killer.[2] When Anna was arrested and put on trial, he was called as a witness, where he claimed she didn't use her poison for her chore but couldn't provide any concrete evidence that she was the killer.

Retrieved from "https://runescape.fandom.com/wiki/Stanford?oldid=24563224"
Community content is available under CC-BY-SA unless otherwise noted.