Start a Wiki
For other tablets, see Stone tablet.

Yes
The Curse of Arrav
No

You'll have to go to Lamistard's Tunnels to find a new one.

The stone tablet is an item found in Lamistard's Tunnels during The Curse of Arrav. Lamistard was a Mahjarrat who died in the fourth age, and tunneled to get closer to the mahjarrat's ritual stone before being caught and sacrificed in the ritual. 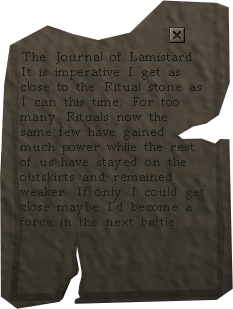 The following text is transcluded from Transcript:Stone tablet (Curse of Arrav).
The Journal of Lamistard. It is imperative I get as close to the Ritual stone as I can this time. For too many Rituals now the same few have gained much power while the rest of us have stayed on the outskirts and remained weaker. If only I could get close maybe I'd become a force in the next battle.