Wonder how long he's been here... 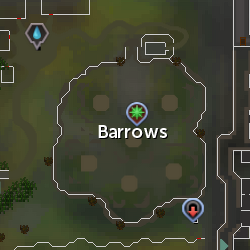 The Strange Old Man can be found digging in the Barrows mounds. As his title suggests, he is a very peculiar individual with an obsession for digging, often saying strange things. During The Temple at Senntisten, he assists in recovering the icon guarded by the six brothers. He also sent a scroll containing The Fall of Six to Reldo, found in the Lores and Histories section. The crumbling tome used to occasionally be received when he was talked to but it is now on a table north of Barrows near the entrance. He has recently put spades to the Barrows mounds, which can be helpful for completing the Barrows minigame.

He also provides the rewards for the hard Morytania Achievement Diary.