You can read this book at any time by visiting the Dungeoneering Tutor.

A token that doesn't seem to belong inside Daemonheim[sic]

The strange token is a random drop from any monsters roaming any of the warped floors of Daemonheim. It is the twentieth Miscellaneous journal and looks exactly the same as the tokens earned in the Fist of Guthix minigame. Why this item is found so deep in Daemonheim is a mystery. It is regarded as the rarest journal drop. Its drop rate is estimated between 1/10,000 and 1/50,000.[1] Complexity does not influence the drop rate. Because of its very rare drop rate, Jagex excluded it as a requirement for the Master quest cape.[1]

You can show the token to the smuggler (use on him). He keeps it and it shows up in your journal. 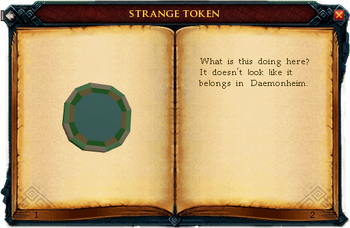 The following text is transcluded from Transcript:Strange token.

What is this doing here? It doesn't look like it belongs in Daemonheim.

When used on the Smuggler

Retrieved from "https://runescape.fandom.com/wiki/Strange_token?oldid=25382703"
Community content is available under CC-BY-SA unless otherwise noted.