Hair of the Dog Tavern

A typical villager of Canifis. 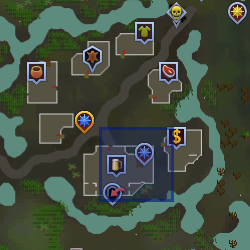 A character known only as Stranger can be found in the Hair of the Dog Tavern in Canifis. He can be found seated in a corner of the inn, and based on his facial features is a werewolf like the rest of the town's population.

Prior to completing In Search of the Myreque, the stranger's chair is occupied by Vanstrom Klause, a vampyre disguised as a human who is scouting the area for The Myreque organisation. At this point, the two appear identical in all but facial features, and only upon completing In Search of the Myreque will the Stranger replace Vanstrom. The two are so similar in appearance that, after completing the quest, the player will briefly mistake the Stranger for Vanstrom.

Retrieved from "https://runescape.fandom.com/wiki/Stranger_(In_Search_of_the_Myreque)?oldid=25382582"
Community content is available under CC-BY-SA unless otherwise noted.