The Stronghold of Player Safety is a dungeon under the Misthalin Training Centre of Excellence. It can be found exactly north of Gunnarsgrunn and exactly south of Edgeville. It was launched on 11 March 2008. It is similar to the Stronghold of Security in that harder enemies are found deeper and deeper into the old part of the jail. Once at the end leaving is accomplished by climbing up a rope and re enter the deepest part of the jail using the roach tunnel by the side of the school. 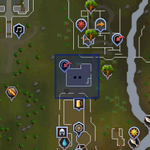 At ground level, there are two doors and a crevice. The crevice is a shortcut into the dungeon (can only be used after climbing the rope from inside the dungeon at least once). The main door to the Training Centre is locked before doing the player safety exam. The second door (at the back of the building) is the Jail Entrance, which allows the player to access the jail.

Players must inspect all jail cell doors, then proceed upstairs and talk to Professor Henry, who will administer a short test about player safety. This will unlock the Safety First emote. After passing the test, players can go back downstairs and peel back the poster in the cell North of the South-Western cell to access the main dungeon. Players older than 13 can skip the cell doors and the safety test and immediately enter the dungeon. They will receive the Safety First emote when they search the chest at the end of the dungeon.

In the secure sector a chest will be found. 10,000 coins and safety gloves are received when opened. Also 2 lamps that will grant 500 experience each, and unlock the safety first emote at the end of the last level of the Stronghold of Security.

Almost all the monsters in the Stronghold are not aggressive. The Stronghold of Player Safety may provide a good place for low level combat training, especially for free-to-play players.

The Stronghold was originally a massive prison that housed some of Misthalin's worst criminals, such as the gang members of Varrock or criminals operating over the Wilderness border. It was built some time in the late Fourth or early Fifth Age.

The massive prison soon fell into disuse, its guards wandering off and tunneling creatures causing problems. For years it remained abandoned, a strain of massive cockroaches making their home in the moist tunnels.

Recently a smaller prison was built in the tunnels above the ruins, and an educational centre built above it. The old prison has been rediscovered and opened to adventurers that look to explore its ancient ruins.

Retrieved from "https://runescape.fandom.com/wiki/Stronghold_of_Player_Safety?oldid=19580936"
Community content is available under CC-BY-SA unless otherwise noted.