Start a Wiki
RSCOS
This article is about the monster. For wearable armour, see Armour.
Loading...
UnanimatedIn combat 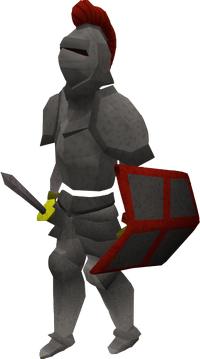 A Suit of armour was an animated piece of armour that could be found in Taverley Dungeon. When players tried to open the gate by the skeletons that leads to the cauldron of thunder, the two suits of armour on the sides would come to life and attack them. They were mainly encountered during the Druidic Ritual quest, and they could either be killed or ignored.

This monster can still be viewed in the RuneScape Bestiary. In High Detail, its shield resembled a Zamorak kiteshield with a light grey colour added to it. Before the graphical update, it appeared to wield an iron longsword.

Retrieved from "https://runescape.fandom.com/wiki/Suit_of_armour?oldid=27381047"
Community content is available under CC-BY-SA unless otherwise noted.