A membership promotion gave players the opportunity to purchase 90 days of members for the price of 5 bonds. That is worth 1,051,861 per day assuming they were bought using coins. In comparison, using 3 bonds for 45 days and 2 bonds for 29 days costs 1,279,290 per day.

Players who are Gold Premier club members, who subscribe using the Summer Special membership promotion, or who previously owned the Enlightenment aura received the Illumination aura on 1 June 2016. This can be activated for one daily to give 10% bonus experience for an hour. There is a highscore for the base experience gained while using the aura. The aura will be usable until 9 September 2016.

Each month between June and September players may claim and enter Summer sweepstake 2016 tickets into a raffle by talking to Balthazar in Burthorpe. The amount of tickets that can be claimed increases with each month of consecutive membership the player has during this period. A small XP lamp is received for each ticket the player enters into the raffle. Prizes are drawn and can be claimed at the end of each month. For the month of September only there is a chance to win a trip to Jagex HQ as a raffle prize. September's regular prizes could be claimed from the beginning of November. Ironman players may claim tickets but can only enter their tickets in September. They will receive small XP lamps for doing so. 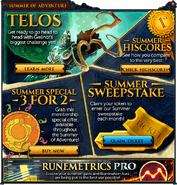 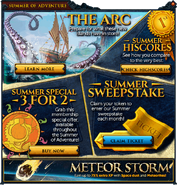 The Arc & the Summer Special 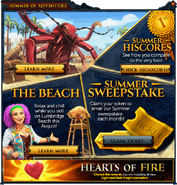 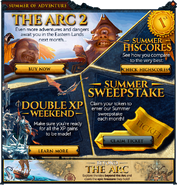 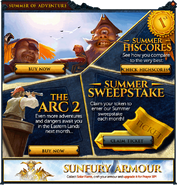 The Arc 2
Click an image to enlarge
Retrieved from "https://runescape.fandom.com/wiki/Summer_of_Adventure?oldid=24925556"
Community content is available under CC-BY-SA unless otherwise noted.