The Superior hero outfit is a reward for completing 25 of the super challenges or finishing in the top 1000 in one of the two hiscores events, during the Super September event. The set consists of: 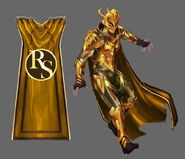 Retrieved from "https://runescape.fandom.com/wiki/Superior_hero_outfit?oldid=24921269"
Community content is available under CC-BY-SA unless otherwise noted.