Suqah are a race of strange-looking but powerful creatures native to Lunar Isle. Players must have at least started Lunar Diplomacy to have access to Lunar Isle. Despite their fearsome nature, they have a peaceful relationship with the Moon Clan, but are aggressive to outsiders, effectively serving as guards.

The suqah attack with melee, even at a distance, and those on the northern part of the isle attack with melee and a weak version of Ice Barrage or Water Wave on their opponents. (The Oneiromancer said the Moon Clan gave magic to the suqah to help them protect themselves.) The Ice Barrage attack always causes 100 life points when it hits, but it only freezes the player for about five seconds. It is still possible to fight or eat while frozen, but not possible to walk or run. Neither spell is particularly accurate; however, their damage can add up very fast when they do hit, so food or Guthan's armour is highly recommended.

The suqah on the southern portion of the island do not use Ice Barrage, making them the more common target for Slayer tasks. However, these suqah are more widespread and, therefore, less efficient for the use of a dwarf multicannon. Though it is more costly due to the necessity of extra food or prayer potions required for Protect From Magic, killing the suqah on the northern portion of the island with a dwarf multicannon drastically speeds up Slayer tasks. When wearing a twisted bird skull necklace/split dragontooth necklace/demon horn necklace along with a bonecrusher and a dwarf multicannon you will regain Prayer points very fast.

A caged suqah is on the bottom deck of Captain Bentley's ship, the Lady Zay, docked on Lunar Isle, which attacks with magic but only when the door is open; therefore, it can be ranged/maged/halberded in complete safety. Note that this suqah will not appear when the ship is docked at the Pirates' Cove.

Suqahs mainly drop suqah teeth or herbs, and rarely drop anything else. However, they seem to have a reasonable (albeit still uncommon) drop rate for crimson and blue charms. Suqahs' herb drops can be beneficial if you use them to make guthix rest teas, which heal 200, among other benefits.

The suqahs' appearance and attacking animation were updated along with the Livid Farm update. Suqah teeth can be sold to the tooth fairy for 2,000 coins each after Fairytale III - Battle at Orks Rift. Suqah teeth are also one of the five components needed to get the tooth creature.

Ranging a suqah from a safe spot. 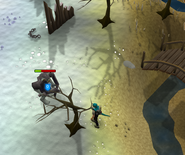 One of the many other safe spots.
Click an image to enlarge

While it's true you can skip slayer tasks, it's not always the best method, for those grinding points on slayer, here are a few pointers.

Due to the now ranged ability of the Suqahs' (Which still hits melee) safe spots are mostly useless. For mages, it should be clear by now that fire spells are the way forward.

As with most slayer tasks, dual crossbows are the way forward, with suggested level 60 defence and ranged or higher to take them on, even with food and prayer, using potions. alternatively, chinchompas are a great way of range training.

For melee, taking a similar approach as ranged works too. Using level 60+ melee stats should work with food and potions to allow for fast kills. It's suggested to use a whip (If available, if not, dragon scimitar) and an off-hand claw of at least adamant, this will allow you to kill the Suqahs', taking only between 2-4 hits with recommended stats and potions/prayer.

Due to the (mostly) aggressive nature of Suqah's, afking can be done for a short while. using any of the above methods of ranged, melee or mage, a player can effectively sit there and just kill the Suqah's using auto-retaliate. After a short while, the Suqah's will become non-aggressive, which may be a good time to restock on food. Use potions and occasionally eat food, not worrying so much about prayer.