This doctor really knows her stuff. 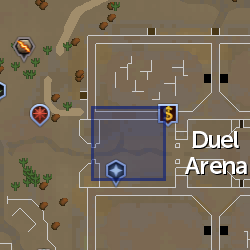 Surgeon General Tafani is the lead surgeon at the Duel Arena. She mentions that Jaraah performs surgeries as well, and is known by his nickname, "The Butcher". She also employs two nurses, Sabreen and A'abla, to assist her in her surgeries. She, along with Jaraah and the nurses, can heal players if they have lost life points. They can heal players who are not playing the minigame, and can be useful to players fighting in the nearby area. The healing is free of charge. She does not heal poison though. Tafani, as the master of Constitution, sells the Constitution cape to members with level 99 in Constitution.

She has a small role in Our Man in the North, where she speculates that the player, having just come from a duel with Ambassador Jabari, is suffering from head trauma when they are actually speaking to Het, who is invisible to the staff of the Duel Arena.

Retrieved from "https://runescape.fandom.com/wiki/Surgeon_General_Tafani?oldid=24562592"
Community content is available under CC-BY-SA unless otherwise noted.