Start a Wiki
CSOS
This article is about a village in Karamja. For the quest, see Tai Bwo Wannai Trio. 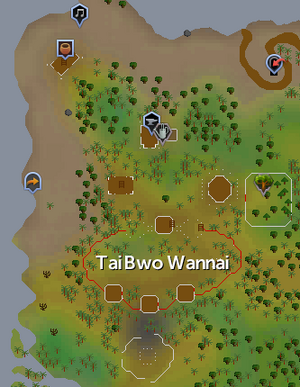 Tai Bwo Wannai Village is located south of Brimhaven, deep in the jungle of Karamja. It is home to a number of villagers. However, it does have a problem with its location, as the surrounding jungle always seems to be trying to grow back over where it once was.

Broodoo victims sometimes attack the village as part of the Tai Bwo Wannai Cleanup minigame, but most people just run from them, because they are very strong for their level, have high defence to most things except their weaknesses, and they disappear very rarely. They also cast stat-weakening spells.

Very few villagers appear until after you have completed Jungle Potion. You also must complete Tai Bwo Wannai Trio to use the statue.

The village deals primarily in trading sticks and is the only place to trade in them.

and after the Tai Bwo Wannai Trio quest is complete:

Retrieved from "https://runescape.fandom.com/wiki/Tai_Bwo_Wannai?oldid=21936800"
Community content is available under CC-BY-SA unless otherwise noted.