Tai Bwo Wannai Cleanup is a members minigame that takes place around the village of Tai Bwo Wannai on western Karamja. Players must have completed the Jungle Potion quest before they may take part in the minigame. The game centres on the earning of favour from the local villagers, and receiving trading sticks as a reward.

It is popular because of the special hardwood grove woodcutting area containing teak and mahogany trees which are only accessible by paying 100 trading sticks, and it is a good way to obtain the snake hides necessary for snakeskin armour. With the advent of the Summoning skill, it has increased in popularity since some monsters drop pouch components. These formerly useless items can now fetch a very good price at the Grand Exchange.

Players may be attacked by level 60-95 foes during the minigame. These foes include jungle tribesmen and snakes that can poison.

A player hacking a dense jungle.
To start the minigame, players must speak to Murcaily on the east side of the village, (

2•1)… near the mahogany and teak woodcutting area. He will tell them about the people who have started to return only to find their village overrun by jungle and other nasty surprises.

He will then tell players that in order to help out, they must help rebuild and reinforce the village fence by cutting the jungle. In return they will gain favour, which may be exchanged with villagers for trading sticks. The current unofficial Tai Bwo Wannai Cleanup world is World 56.

You must repair at least one piece of fence before any villager will give you rewards. While doing My Arm's Big Adventure there is a chance the villagers will not trade you any sticks, if this happens completing the quest should resolve the issue. You can achieve 100% favour without repairing fence, and satisfy the Karamja Tasks requirement, but still not be able to receive trading sticks, if you have not repaired any fence. After you have repaired some of the fence, the locals "noticed you doing some work around the village" dialogue option will become available.

There are three different ways to earn favour from villagers:

There are three types of jungle surrounding the village, with light being the most common and dense the most rare. A machete is required to cut them. Woodcutting experience is gained from hacking these jungles.

Clearing a patch of jungle may reveal a gem rock, which can be mined for up to 4 random gems up to diamond, or a gout tuber, which is needed for the Karamja achievements (and also fetches a price of 105380 on the Grand Exchange).

The rotten village fence can be repaired with a machete and thatch spars obtained from cutting jungle, although this is not recommended because favour can be earned much more quickly by simply cutting the spars into skewer sticks and continuing to hack the undergrowth. Village fences may be repaired with different types of thatch spars: light, medium or dense. The only difference between these is the woodcutting experience received for each spar added to a fence (light: 28 XP; med: 42 XP; dense: 65 XP) and the repair speed.

The player needs 4 spars to repair the fence and 1 more spar to reinforce it for the first time. A fence made with 4 spars lasts just as long as one made with 5 spars. After the first reinforcement, clicking "Reinforce Village fence" again immediately will result in the player adding to the fence an unlimited number of spars, until the spars in the inventory run out.

As the fence decays continually, the repairs made by a player will eventually collapse. Fences will always last around 16 minutes, no matter which spars they were made with. Reinforcement does not prolong the amount of time before the fence collapses.

Killing threats to the village

Several types of enemies may attack players while they are hacking the jungle. These enemies are random. All poison caused by the poisonous enemies in this minigame will start at 48 life points per hit.

Broodoo victims are an enemy category of their own. They have a combat level of 60 and come in three different colours. They attack with both melee and magic and their spells tend to drain up to four levels from Attack, Strength, Defence, Constitution, Magic, and Ranged in a single hit. You can only hit 1/4 of the normal damage you can normally hit against them, however, players with decent combat stats (90 combat) wearing a tier 60 weapon of any kind shouldn't have many problems dealing with them. Each colour has a specific weakness relating to how they were killed.

Tactics for Broodoo victims include:

Broodoo victims drop tribal masks. Using a hammer with a mask, two snakeskins, and eight nails, will make a broodoo shield. Even though it does look nice along with the mask, these shields have a very hard time selling on the Grand Exchange.

Once players have claimed trading sticks from a villager they must wait a set period of time before they can ask the same person for trading sticks again. Once the favour percentage runs out, the villagers will no longer give trading sticks. 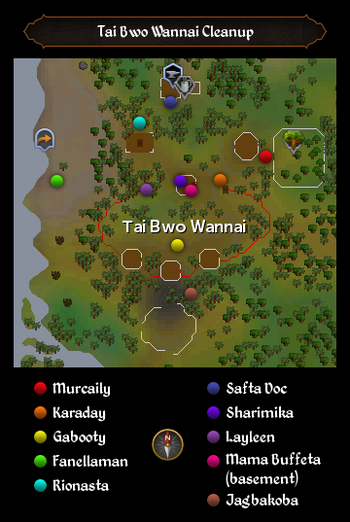 Trading sticks are supplied by villagers who are spread around the village. Some of them are located at upper levels, while others wander outside the village fences. The villagers also move about, and it may take some effort to find them.

The villagers who supply trading sticks are as follows:

Do not wear any broodoo mask; otherwise the villagers will be scared and won't even speak to you without screaming.

In addition to supplying trading sticks, Rionasta offers a service of providing players the means to store items in their bank without a lengthy trip to a bank in Ardougne or Shilo Village.

Banking any item costs 10 trading sticks. Stackable items are considered as individual items; for example, sending a stack of 50 arrows will cost 500 trading sticks. The service can be accessed by speaking to Rionasta and asking what he does around there.

Rionasta only lets players bank items, not withdraw them. His service also does not include currency, whether it be coins or trading sticks.

This minigame used to be a popular way to make money. Most of the items obtained from it sold very well on the Grand Exchange, and were usually very valuable as well. Many items required for this minigame (food, antipoison and Relicym's Balm) can all either be bought in the general store to the north and can be found or made on Tai Bwo Wannai. Combined with the Parcel Service, this meant that it was possible to stay for an indefinite amount of time. However, starting in 2011, most of the items from this minigame crashed in price on the Grand Exchange, many becoming worthless. It is no longer an advised way of making money. As such, it is now mostly empty.

Retrieved from "https://runescape.fandom.com/wiki/Tai_Bwo_Wannai_Cleanup?oldid=22250199"
Community content is available under CC-BY-SA unless otherwise noted.