So now it's possible to directly buy gp officially? The bonds are bought with real money (£3) then traded in-game for gp (determined by the GE Price). Am I understanding this correctly? 04ismailjj6 (talk) 15:36, September 25, 2013 (UTC)

So how does this help combat inflation? The exchange rate is effectively 5M Gp for £1 and will probably increase. There are plenty of people willing to spend in excess of thousands of real pounds for in-game currency and tens of thousands more who will happily buy a few hundred pound to make a quick billion. They could easily pour more money into the game than the gold farming bots ever could. 04ismailjj6 (talk) 16:04, September 25, 2013 (UTC)

Eh, EVE Online has virtually the same thing with their PLEX, and that game is just fine. I personally support the concept of buying gold - it's silly for me to farm gold when I can spend the same time doing work in the real world, make real money, and just buy far more gold that I could have earned in that time.  Why force players to spend unhealthy amounts of time in game just to enjoy the best content?  —The preceding unsigned comment was added by 24.121.9.44 (talk) on 09:41, September 26, 2013.

I support being able to buy gold as well. However, where's the end to this? The game was designed so that as long as you met a certain level of affluence in real life, you had access to all parts of the game (flat rate membership fee). I haven't been keeping track with current discussion on the ethics of such Bonds, but the fact is that those who have a larger disposable income in real life gain an (arguably) unfair advantage over those who don't have the same resources. Thus, this becomes an issue of ideology (capitalism, which is very clearly shown in modern society that not all have equal opportunity for success) that supercedes the controversy of an artificial economy! Achiox 15:20, September 29, 2013 (UTC)

The beauty of bonds is that isn't just like buying gold from bots or even straight from Jagex. Whenever a person buys a bond to sell for gold, the person who buys the bond in game can receive membership, Runecoins, or spins without real world wealth. If you work out a decent in game money making strategy, you can actually pay for continuous membership with in game money. Before, buying gold hurt honest players. Now, bonds offer a legitimate way to benefit both those with real world money and those with only in game money. 98.28.115.94 00:24, January 2, 2014 (UTC)

I removed the part about it being the first item that doesn't stack in the bank. Atleast the clover necklaces share this attribute and I'm pretty sure several other items do too. --EscapeTheApe (talk) 17:49, September 25, 2013 (UTC)

There are probably over a hundred items that don't stack in the bank. Any item with charges or any kind of information stored in it.

What is best price to choose when using bond?

Its nice to see that we can finaly buy runecoins and membership with in game money, but that makes new problem... people can finaly buy rsgp with real money :) its not like they never could, but this is like buying drugs in real life legaly...

so some simple math.... 200 runecoins is 400cents(4euros), so each runecoin is worth about 2 cents in euros... witch means 160 runecoins reward is worth 3.2 euros, afc if you want to buy your own bond from jagex its gonna cost 4.25euros, witch means u loose at least 1 euro like that...

can someone do the math on membership days reward ? :) --

The problem here is that prices of membership do not only vary based on how much of it you buy at once, but also do they vary by country and by payment method, even if those countries or methods share the same currency. I have no idea why Jagex discriminates this way but that's how it is, meaning there is no one true answer to your question.

Bonds are not meant to be used by the person buying them.

Bonds as an alternative way to buy membership?

What's the deal with this section? Where does the $0.35 per million convesion come from? It looks like that's about the rate used by illegal gold farming... The real rate should be tied to the price of bonds, the only legal way of exchanging real money for gold. In that case, this section doesn't really make sense at all, unless it compares prices of buying bonds for membership vs. buying membership directly in each currency/payment method.74.135.57.43 04:29, November 12, 2013 (UTC)

I agree, this section makes absolutely no sense whatsoever and, in my opinion, should be removed. The $0,35 per million conversion rate is indeed often used by illegal gold farmers, but even then the numbers are wrong. Apart from that, comparing different methods to get membership in RS currency using àny conversion rate is pointless, as membership costs real life currency using either way (bonds can only originally be acquired by spending real money), and there is no way to convert RS currency into real money.

The only comparison that could possibly be made is comparing the real life currency membership cost using bonds vs paying the monthly fee. As discussed above, bonds are not to be used by the buyer itself and are thus more expensive for getting membership.

Voting to remove this section asap for being confusing and pointless.

Why do we need to be charitable through runescape?

Don't people think its some-sort of scam? Since if one wish to donate, one can donate directly to those organisation... No need to donate through Runescape especailly when it is not the full amount donated (4.7USD instead of 5) per bond...

So do we add the part about them being morons due to the fact that real-world trading is classified as someone OTHER than Jagex selling RuneScape items/gold? Sir Revan125 (talk) 21:38, December 22, 2013 (UTC) 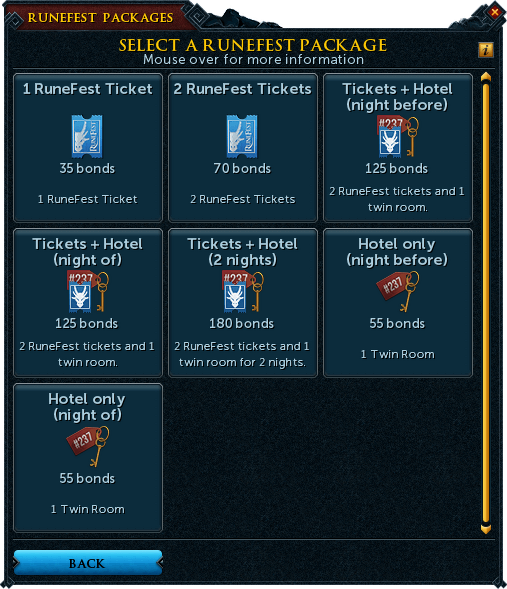 Ok, changed both UK and Brazil into tables to take account into differences. Not sure how to handle Euro however. Thanks for the feedback! --Jlun2 (talk) 01:06, April 25, 2016 (UTC)

By the countries of the Eurozone, would be my suggestion.

The article states that Jagex donated $4.70 to a charity for each bond donated to the well, which sounds right. The article also states that this is a dollar less than the current price. I seem to recall that the price of a bond was about $4.75 during the previous event. Is this just me? or does anyone else remember?

Hi all! I'm very new to this Wiki and thought after making my first edit that I should post it in this Talk area.

Basically what I did is removed 2 values in the first table with the list of countries, namely for Canada. I then created a separate table underneath the UK table and above the Brazil table, which includes all the minimum wages for each province/territory, as well as including my source. Thanks all and happy editing/Scaping!