Last night I did Rocking out and I took several pictures. I added Lizzie's chathead and full-body and last words pictures. Thanks Cook Me Pl0x and other for cropping, resizing and reformatting my pictures, because last night, I had nor time nor interest to do so myself. :P Again, thanks. :) Paul Z 16:26, January 20, 2011 (UTC)Paul Z  —The preceding unsigned comment was added by Paul Z (talk) on 16:26, January 20, 2011 (UTC).

This character Lizzy is taken from the game Age of Empires III were a female pirate named Lizzy takes up a big part in the storyline of the campaign of this game. She looks almost exactly like the one in Runescape. Im convinced thats where the maker of this quest borrowed her from. 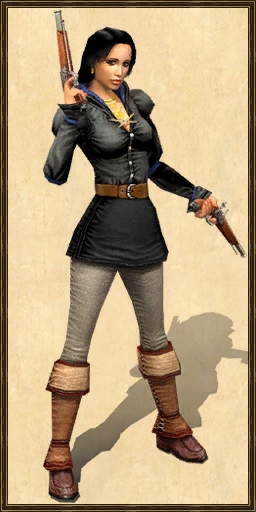 Retrieved from "https://runescape.fandom.com/wiki/Talk:Lizzie?oldid=14171512"
Community content is available under CC-BY-SA unless otherwise noted.