It's a future update.

I'm guessing it's because a majority of F2P is in Misthalin and this is a F2P update. My 2nd theory is that this orb is obtained in Misthalin (although Faruq isn't in Misthalin)-Moneypony 23:46, January 22, 2010 (UTC)

The blog also says "all players", which should refer to F2P- and P2P-players alike.

I seem to remember mod Fnord saying the name's origin was latin, but one point in the trivia suggest it being a reference to a work of fiction. Can someone confirm that the orb of oculus is based off of a "scrying orb" and the name is derived directly from latin?Skel X 07:20, February 2, 2010 (UTC)

If the player will indeed have the ability to pan the camera, I see potential for awesome images being uploaded on the wiki.

Imagine if we had a giant bukkit image...

I personally think this thing sucks. First of all, it's impossible to get into a right point + angle. Second, it would have been better if it had camera functions too, not that it would only pan to use the samme laggy Hypercam and Fraps. Third, it even lowers your defence bonuses! Sorry.

Well yes it would lower ur def it's not men to be used in combat, i do agree the control are anoying but they can be mastred, propblem propbly lie with jagex squares.

People are using the Orb of Oculus as an alternate to remote view and using it to spy into areas that they cannot access. This should be put in the article somewhere.

look at sara godwars watery area- perfect view with the orb. 100% perfect. its epic, almost creepy. gives u the chills. looks cold and wet. has lotta bones there.

WOW! That is crazy! One guy is in a shark jaw, while the other is lying on the pillar-thing! Is it "legal" to post a picture? Because I took several print-screens Vlastne 02:12, February 2, 2010 (UTC)

This is insane! In the room with the ribs, there is also this wooden shack-type thing! Vlastne 02:26, February 2, 2010 (UTC) (I am having so much fun with this)
I took many print screens of the different things, I added one to the noclip page, but if someone creates a page for the secret rooms and stuff that people are finding, I would be more than happy to post my images. Vlastne 02:35, February 2, 2010 (UTC)

I've heard that from the Armadyl Eyrie you can see an overhead view of the entire underwater area! I'll check this out tomorrow.

FYI, I'm pretty sure at least one person has this page watched and will delete anything related to this info on sight. You might want to read/join the discussions about this here first. --Red X 226 08:42, February 2, 2010 (UTC)

"I've heard that from the Armadyl Eyrie you can see an overhead view of the entire underwater area! I'll check this out tomorrow.

What is Focus Mode?

Insted of moving the camera and rotating it (as in aim mode) in focus mode you slect a place to point the camera at and then can move the camera with it allway facing this point. problem is it's hard to determin where it's focused on, jagex rly need to add a indicator.

i just glitched and clicked wen using orb of oculus to see wats in fally bank roof and i went into the place, i climbed down ladder and disconnected and was out of the bank and i couldnt do it again

any1 else get this

"If you go down into the first floor of Stronghold of Security then gaze into the orb just near the ladder and go north-west you can see the Dragon Forge."

I don't recall that place being confirmed as the Dragon Forge by any credible source, should this be rephrased?  Dennoh 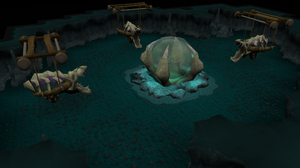 That's not exactly the Dragon forge, but rather the place where you open the door to it. You can see that those two pictures are both the same thing, only the other doesn't have to dragon heads rendered, since you're not supposed to see that from that place.

Kay, thanks for clearing that up.  Dennoh

I believe you can't see the dragonheads because they count as npcs, and you cannot see npcs that far away with the Orb of Oculus. Agent Lucien 14:41, February 3, 2010 (UTC)

the dragon forge is where you smith your dragon platebodys- it has steps, and a area that after the quest fills with lava. it also has bronze dragon heads.

however, the mithril door is were you activate the dragon forge. it is round, unlike the forge, and has a different type of dragon heads. it also has the orb. hope thats clear now.

uh.. anyone nice the "particular" part of the dragon legs that attaches to the orb?

I know that finds with the orbs don't really belong in Orb Trivia section, or in upcoming updates. Perhaps a Sub-page for Orb of Oculus can be made for all the findings to be posted?

Messing around on my way to do Darkness of Hallowvale, when I notice that by the old Myreque hideout there are some odd caves to the west. Naturally, being an explorer, I run back to the bank and grab my Orb of Oculus. After exploring around for a bit I discovered some amazing things!
1: That area has 2 floors, main (area where you come into from the ladder behind Canifis bar) and upper (the place with special stuff!!).
2: That Ivandis's grave is on the upper floor.
3: The caves I found were just some random caves.
4: Upper floor, just north of the southern exit, there's a fairy ring (even though there's no way to get to it :P)!!!
5: Some other random stuff, not really relevant...just that there are some other random caves.
Anyway, I'll be taking some screenies and putting on Photobucket in a sec to show you guys :D

Oh, and if anyone knows how to make them tiny, then click and it goes to full size, feel free to edit that post to change to that!.

Sorry to burst your bubble, but none of that is new. It is all accessible, even the fairy ring (DLS, i think) look at Myreque_Hideout. FKUXW

Previously, you couldn't click on NPCs and people while using the OoO. Now you can, which usually sends your character running off somewhere, cancelling the OoO interface. A simple work around is using the middle button on your mouse to click and drag instead of your left click. :) --

it should be added to the page that the orb is disabled for legacy users. i'm not sure when this was done but in legacy I cant use it.User:Heavyoak/Signature 08:27, March 8, 2015 (UTC)

Retrieved from "https://runescape.fandom.com/wiki/Talk:Orb_of_oculus?oldid=13002881"
Community content is available under CC-BY-SA unless otherwise noted.