He's looking wicked in the hood. 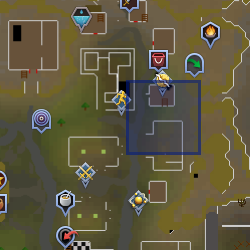 Tam McGrubor is a member of the Zoological Magical Institute[1] who hands out wicked hoods to members, regardless of their skill levels. He can be found just outside the Runecrafting tutor area in north-east Burthorpe. When talking to him he will also explain some basic details about how the Runecrafting skill works. He will not give you a second hood if you already have one. If the hood is lost, he will give you a new hood for free.

It is likely that there is a sinister purpose behind his free distribution of wicked hoods, as it is mentioned in a game FAQ that "You want to wear the Wicked hood. You want others to wear it. Soon, everyone will be wearing one. Tam is pleased. Tam's plans come to fruition."

Despite Tam's surname, he is not the owner of McGrubor's Wood, although he did once hide out in it.[2]

Retrieved from "https://runescape.fandom.com/wiki/Tam_McGrubor?oldid=24564578"
Community content is available under CC-BY-SA unless otherwise noted.