View source
watch 02:56
Raise a Floppa - The Loop
Do you like this video?
Play Sound
OS
Loading...
HumanIn combat 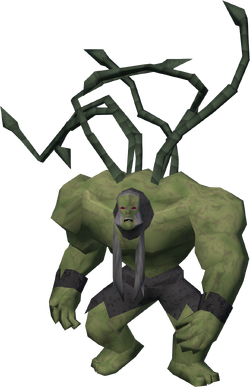 Tarn Razorlor is a sorcerer and necromancer that dwells in his Lair beneath the Mort Ridge Mine. He is the boss monster in the miniquest called The Lair of Tarn Razorlor, and is guarded by his undead minions, animated steel armour, and terror dogs.

Tarn Razorlor is fightable as a class H boss monster in the Dominion Tower minigame if the player has completed Haunted Mine.

He and his followers originally trekked through Morytania searching for a mysterious and powerful crystal with which to control the undead. In the process, it is implied that Tarn encountered Treus Dayth, the guard of the crystals, and fled into an ancient dungeon beneath Burgh de Rott while his followers attempted to destroy the ghost. His followers are now dead, but with his necromancy skills he made them into the undead that scatter the lair. He is insane and was once an ordinary man; now he is a twisted monster.

He also seems to have had an encounter with Sumona, as she says that he "annoyed her when he was young." when assigning the player a Terror Dogs Slayer task. How or when this occurred is currently unknown.

When Tarn is first encountered, he is in human form, and then proceeds to change into a mutant form (level 79) before attacking. Even after he is defeated in this form, a ghost form (level 79) will appear and attack. After the ghost is dealt with, Tarn will finally be defeated. After he is defeated, one will receive 5,000 Slayer experience. In addition to that, they gain the ability to enchant the salve amulet into the enchanted salve amulet (e), using Tarn's diary. This amulet used to raise the wearer's Attack and Strength by 20% while attacking undead monsters, but will now increase accuracy and damage of all combat styles by 20%.

I can't be slain that easily, fool!

In the Dominion Tower, Tarn starts the match in mutant form with four large terror dogs next to him. In mutant form, Tarns attacks with magic while the dogs attack with melee. Once mutant Tarn is slain, his ghost form appears and attacks with melee. Unlike in his lair, he has no weakness here, so all attack styles are equally effective.

The match is won by killing the ghost Tarn. The terror dogs do not have to be killed.

As the match does not occur in Tarn's lair, the rapid Prayer drain of the lair is not in effect, making it practical to pray during the fight. Protect from Melee/Deflect Melee is most effective, reducing the damage taken by the dogs and the ghost.