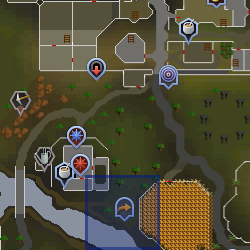 Tarquin Marjoribanks is a man found south of Varrock behind the Champions' Guild where he teaches players about canoeing. He is part of the Varrock Royal Family, and is related to King Roald. Although he is actually Roald's fourth cousin once removed on his mother's side, he believes that he is closely related to the king.

Retrieved from "https://runescape.fandom.com/wiki/Tarquin?oldid=24562535"
Community content is available under CC-BY-SA unless otherwise noted.