One large obelisk, below ground 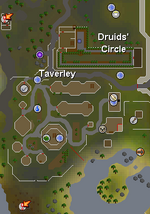 The town of Taverley lies to the North-west of Falador and is the farthest west players can go in the kingdom of Asgarnia. It lacks a bank, but it is a starting point for several quests, and houses the Taverley Dungeon. Most of the humans in Taverley are druids, followers of Guthix that live close to nature. Taverley is available to members only. However, you can easily see much of it using an orb of oculus in free play.

Summoning Supplies can be found near the P2P entrance gate in Taverley. It is maintained by Pikkupstix, and sells Summoning pouches, spirit shards, spirit shard packs, antlers, and the summoning cape. You can also sell him Feather headdresses.

Jatix's Herblore Shop is located in the centre of Taverley. Jatix sells vials, vial packs, pestle and mortars, eyes of newt and eye of newt packs.

Gaius' Two Hand Shop can be found can be found near the POH portal in Taverley. The two hand shop sells two-hand swords, ranging from bronze to adamant.

Bettamax can be found in front or beside Gaius' Two Hand Shop. She only sells juju teleport spiritbags. The spiritbags are used to teleport the player to Herblore Habitat.

While there is no bank within Taverley itself, the closest banks are:

Between the years 1 and 200 of the Fourth Age, The Druids of Guthix erected a stone circle slightly north of the site now named Taverley. It is unknown whether the Druids had already settled at Taverley before they erected the stone circle, or whether had already erected the Stone Circle before settling at Taverley. Taverley was definitely created by the Druids, as it seems to have grown out of the ground. Evidently the ability to grow houses, as well as furniture is an art which has been lost even to the Druids over the course of time.

The Tunnels below Taverley were most likely discovered sometime near the end of the Third age, or the beginning of the Fourth age, when Zamorakian Disciples wandered into the cave system, and inhabited one of the few empty or near-empty caves. Later on, a group of Druids either rebelled and were forced to enter the caves, or stumbled on the caves by accident and were converted into believing in Guthix and Zamorak by the Zamorakian Disciples, before inhabiting another near-empty cave and erecting an altar slab for sacrifices to their deities.

In Year 2,000 of the Fourth Age, rune essence is discovered. The Druids will learn the art of magic soon after, and will use for years, for defensive purposes, until present day, 169 Fifth Age. The end of the Fourth Age, Start of the Fifth age.

Year 8: Modern Falador was established by King Raddallin with aid of the White Knights and Kinshra, two rival knightly orders founded in the late Fourth Age. The Druids were protected by the White Knights, allowing them to live without fear of invasion.

Year 42-62: The runecrafting crusades begin. Barbarians from the Fremennik province launched a brutal crusade against the arts of magic and runecrafting, saying they are fit only for the Gods. Due to the fact that they had almost reached Varrock by Year 62, it is almost definite that the Druids would have been pillaged by the Barbarians, as they were known magic users, and over the ice mountain, right next to Taverley, was probably the way the Barbarians came, as a road leads from Taverley to Varrock, the Barbarians final destination.

Year 164: Civil War between the Kinshra and The White Knights sparked. The goblins of northern Asgarnia, with the exception of the Thorobshuun and Garagorshuun, invade Taverley under the instruction of Lord Sulla. Many of the houses of Taverley are burned and some twenty Druids are killed. After the War of 164 ends, Taverley is re-populated and restored.