He seems to sell tea. 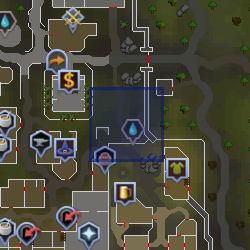 The Tea seller runs a Tea stall in Varrock just a bit south of the east bank. Players can steal tea from his stall. After you've stolen from his stall he will yell "You're the one who keeps stealing from me! Guards, Guards!", although none will ever come to him. If players touch the tea sitting on the table in front of him he will yell "That's only on display today!". Furthermore, using Telekinetic Grab on the cup will result in him saying "Hey! Put that back! Those are for display only!". Strangely, it doesn't consume your runes which means that you cast a spell without casting it.

Level 5 Thieving is required to steal from a tea stall. Like all stalls, if you talk to him again he will shout rather pointlessly. The tea he sells is sold for 10 coins.

Retrieved from "https://runescape.fandom.com/wiki/Tea_seller?oldid=24562612"
Community content is available under CC-BY-SA unless otherwise noted.