Team capes are wilderness capes that can be purchased for 50 coins from cape merchants. Another player with the same team cape equipped will show up on the minimap as a blue dot rather than white, and the left-click "Attack" option will be moved to a right-click, as if the other player is of higher level than the player. If two players are wearing different team capes, then the "Attack" option for each other will both be left-click, regardless if one player has a higher combat level.

Team capes are popular in Wilderness Warbands to prevent accidentally attacking allied players. Team capes are a popular choice for free players due to its affordability, better looks compared to single-coloured capes, and better bonuses.

One team cape can be stored on a cape rack in a player-owned house.

There are currently 50 cape designs. Team capes vary in colour: 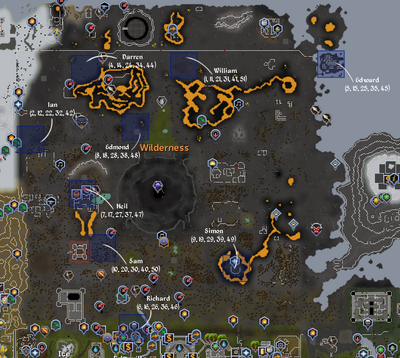 Retrieved from "https://runescape.fandom.com/wiki/Team_cape?oldid=21374823"
Community content is available under CC-BY-SA unless otherwise noted.