View source
watch 02:52
Roblox: DeepWoken - The Loop
Do you like this video?
Play Sound
OS
This article is about the quest. For other uses, see Tears of Guthix (disambiguation).
[view] • [talk]

Tears of Guthix is a quest where you must help Juna, a follower of Guthix, restore the cavern where the walls bleed tears, supposedly from Guthix. The rocks weep still, a memory of the God Wars and Guthix's measures to end them.

Deep in the caves in the Lumbridge Swamp is an enchanted place where the tears shed by Guthix when it saw the destruction Saradomin and Zamorak had caused with their wars flow from the very walls. These tears are said to have magical properties to help players gain deeper understanding of the world. However, the cave is guarded by a loyal serpent named Juna who blocks passage from everyone. However, she has grown bored from three thousand years of sitting in the dark cave and wishes to hear stories of life above. Maybe you could come to some sort of arrangement...? 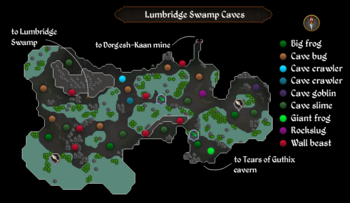 To start, enter the Lumbridge Swamp Caves in the western part of the swamp; you may need to attach a rope to climb into the caves, if you haven't done so already.

Wear a spiny helmet for protection against the wall beasts, and a covered light source to prevent gases in the caves from exploding on you, causing heavy and rapid damage. Bringing both of these items significantly reduces the likelihood of death in the dungeon.

If The Lost Tribe has been partially completed, to the part where you get the Brooch, you may open a passage to the Lumbridge Swamp Caves and go directly south from there to get to the stepping stones.

Keep heading south-east from the cave entrance until you find a small stream, where you must use a stepping stone to cross over. If you fail the stepping stone shortcut and have a candle lantern, it will be smashed into a few broken glasses, even if it wasn't lit.

On the other side are non-aggressive giant frogs, alongside another cave entrance. Go through it and you will find yourself in an area with a huge pit in front of you, with countless, shimmering light creatures flying over it. Venture along the east path to find Juna.

When you talk to Juna, she will impart you knowledge about Guthix and His sacred tears, which she now guards from unworthy adventurers to maintain balance. Although, being alone for ages, she yearns for some company every now and then.

She's willing to let you into the cave for a little while to gather some of the tears of Guthix, but first, she would like to hear a story from you. Unequip your weapons and shields, and tell her a story about your adventures around Gielinor and you will obtain access to the cave for a very short time. To collect the tears, you will need a stone bowl which needs to be crafted from a special rock found only across the nearby, giant chasm.

Spread across the chasm are entities called light creatures. These ancient creatures ride alongside the gem casting beams of their own colour, hence you require a lit sapphire lantern in order to attract the creatures.

Light your lantern with the tinderbox and use it on one of the light creatures, which will transport you over to the rocks.

Use your pickaxe to get a magic stone and craft it into a stone bowl using a chisel. Jump down the cliff to the east and head back to Juna. Give the bowl to her, and your quest is complete. 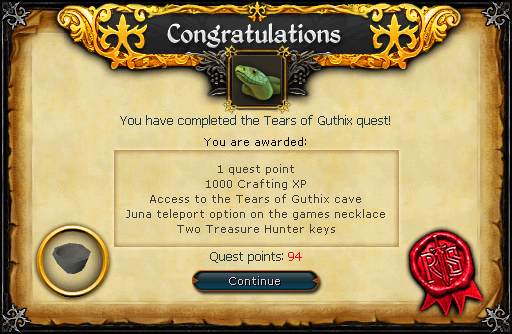 Completion of Tears of Guthix is required for the following: