Tectonic armour is tier 90 degradable magic power armour, made with materials dropped by Vorago (tectonic energy) and from the Wizard's guild or Bandit Duty Free (stones of binding), requiring level 90 Defence to wear. A high Runecrafting level is required to craft this from the raw materials (91-93 Runecrafting, in order of mask, bottom, and robe top, though assists and boosts can be used). It is the magic equivalent to malevolent and sirenic armour.

Tectonic armour degrades for 100,000 charges of combat before falling apart and vanishing completely ('degrades to dust'). It cannot be repaired normally, but two partially used parts (of the same type) can be combined to consolidate the charges - e.g. using a 90% charged mask on a 2% charged mask will result in a 92% charged mask. The armour is tradeable until it is first worn - a warning message is given when attempting to first wear a tradeable part - and partially worn parts are not tradeable.

Dyed equipment instead turns into a broken state when fully degraded - simply adding tectonic energy to the broken piece will repair it.

To augment tectonic armour a new, fully charged item (do not wear the item), an augmentor, and 36 divine charges are needed to manufacture the armour at the Inventor's workbench. It cannot be made from a partially used component. Once it is worn it is no longer augmentable even if not used. Augmentation dissolvers cannot be used on these items.

Retrieving unprotected parts from a gravestone will cause the part to lose 10% of its charges. Dying in dangerous PvP will drop a fraction of the tectonic energy used to create the part, based on how degraded it was, rounded down - e.g. a mask with 52% charges remaining will drop 7 tectonic energy.

Using dyes from Treasure Trails, tectonic armour can be recoloured.

Dyed tectonic armour also has 100,000 charges of combat, but degrades to a broken state instead. It can be repaired using tectonic energy.

A player with the barrows-dyed set equipped

A player with the shadow-dyed set equipped

A player with the Third Age-dyed set equipped

A player with the blood-dyed set equipped

A player with the ice-dyed set equipped

Concept art of the tectonic helm and robe top 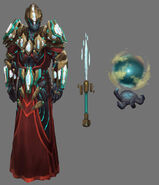 Concept art of the back of tectonic armour