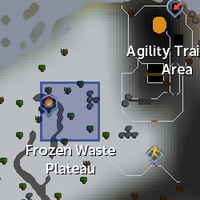 Tele-group Ice Plateau teleports the caster along with anyone within a 3x3 square area (including standing on the player's square) to the members half of the Ice Plateau in level 53 Wilderness. Players must have Accept Aid turned on in order to be teleported by this spell. If there is no one in the 3x3 grid with "accept aid" on then only the caster will be teleported. A message used to appear, warning the caster that they are about to teleport/be teleported into the "Deep Wilderness" with an option to abort. This was removed some time ago, although the other players around the caster still see this option. As with all Lunar Spells, the quest Lunar Diplomacy must be completed to cast this spell.

This spell was widely used during the Rule Seven Protest. Before the Deep Wilderness window was introduced, some players used it as a method to lure other players into the Wilderness, where they could be killed and their items taken.

People scam with this spell by offering a player the teleport, and when they appeared at Ice Plateau, they would get killed by the teleporting player.

Retrieved from "https://runescape.fandom.com/wiki/Tele-group_Ice_Plateau?oldid=21134591"
Community content is available under CC-BY-SA unless otherwise noted.