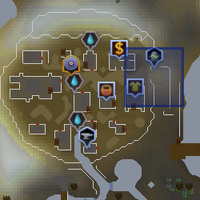 Tele-group Moonclan teleports the caster along with anyone within a 3x3 square area (including standing on the player's square) to a spot near the bank in the Moonclan town. Players must have completed Lunar Diplomacy and have Accept Aid turned on in order to be teleported by this spell. If there is no one in the 3x3 grid with "accept aid" on then only the caster will be teleported. As with all Lunar Magicks spells, the quest Lunar Diplomacy must be completed to cast this spell.

The below uses are somewhat superseded by the Lunar Isle home teleport.

This spell is widely used when crafting Astral runes with groups as multiple players can go to the altar and craft their runes, then one person casts the spell and returns everyone to the entrance of town where they can bank. This spell is also popular when runecrafting at the Ourania altar as it allows for quick and speedy banking, as one can simply cast Ourania Teleport to quickly return to the cave, and eliminates the need for 20 of a specific rune to bank there.

It is also the quickest way for a player who is not on Lunar spells to get to Lunar Isle (most likely to switch spellbooks), and this spell may be cast while standing on them free or for a fee. When on Lunar Isle, a Seal of passage is required to talk to most of the NPCs unless Lunar Diplomacy has been completed, so players being teleported there should remember to have one if they are doing more than switching spellbooks.

Retrieved from "https://runescape.fandom.com/wiki/Tele-group_Moonclan?oldid=21134383"
Community content is available under CC-BY-SA unless otherwise noted.