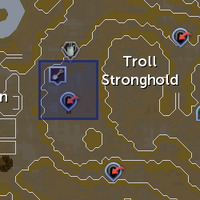 Tele-group Trollheim is a spell available from the Lunar Spellbook. It requires a Magic level of 92 to cast and teleports players in a 3x3 area around them to the herb patch in Trollheim. It can be unlocked from Pauline for 400,000 Produce Points, obtained by training at the Livid Farm.

The spell, upon the first hours of release, only teleported other players and did not teleport the caster, it also gave no delay time, potentially making the caster obtain 9 million Magic XP an hour. This was announced as a glitch and some people abused it, and got their accounts rolled back or permanently banned. This has since been patched.

Completion of My Arm's Big Adventure is required to cast this spell. It is also required for other people being teleported.

Retrieved from "https://runescape.fandom.com/wiki/Tele-group_Trollheim?oldid=20924538"
Community content is available under CC-BY-SA unless otherwise noted.