Start a Wiki
RSCOS
This article is about the quest. For the dungeon, see Temple of Ikov (dungeon).
[view] • [talk]

Temple of Ikov is the first quest to feature the Mahjarrat known as Lucien. Its sequel is While Guthix Sleeps, released six and a half years later. The quest revolves around the infiltration of the Temple of Ikov in order to steal a powerful artefact known as the Staff of Armadyl.

A mysterious stranger called Lucien asks you to go on a mission deep under the Temple of Ikov in central Kandarin. He wants you to retrieve an artifact[sic] known as the Staff of Armadyl. After you retrieve it, the quest doesn't stop there... Are you on the side of good or evil?

Speak to Lucien behind or inside the Flying Horse Inn. The inn is located on the west bank of the River Dougne, just north of the Ardougne Castle.

Lucien says that he needs a hero to assist him in his endeavour to obtain a magical artefact. Tell him that you are indeed a hero, and he mentions that the artefact is called the Staff of Armadyl. Respond with "sounds like it would be a laugh" and he will warn you that a dangerous monster guards the staff, and can only be defeated by a weapon of ice.

He will give you a pendant of Lucien to help you reach the staff. Finally, he will ask you to meet him in Varrock once you have found the artefact.

Items needed: Pendant of Lucien, a light source, weight-reducing clothing and some food is recommended. Must weigh 5.0kg or less (the boots of lightness will lower your weight to the required 0.0kg)

Equip the pendant and make your way to the peristyle, located south-east of the Ranging Guild and north-east of the Ardougne lodestone.

Climb down the ladder, inside the peristyle to enter the temple. Head west along the main corridor until you arrive at a staircase. Make sure your light source is lit, and go down the stairs. Go to the small north-east area and try to slash the spiderweb - it may take a few tries. Take the boots of lightness from inside and equip them.

Go back up the stairs. Return to the centre of the corridor, and enter the north gate. Make sure you have Lucien's pendant equipped, or "a great terror will overcome you!" and you will be pushed away from the gate. Inside you will find level 58 skeletons. Run to the west until you come to a bridge, which you must now cross. If you run north instead and find yourself in a passage with a door you can't open, you have gone the wrong way.

Crossing a river of fire

If your total weight is more than 0.0 kg the bridge will give way and you will fall into the lava below. You will take up to 200 life points of damage before washing up near numerous scorpions. If this occurs, exit via the ladder to the south, head to a bank and unload a few items. You may also use a beast of burden familiar to carry the items you need.

If you are planning to go and bank some items, be sure to pull the lever first. If you leave the temple without doing this, you will not be able to re-enter without collecting a new lever. If you did go through the gate, upon return, it will appear that the lever in the bracket has gone but you will not need to obtain another lever as you can still enter through the south gate.

The area leading from the south gate is filled with a number of level 42 monsters, and you may have to spend some time there, so it may be wise to return to the bank and obtain some armour and food. However, if you go to the bank, make sure to bring the pendant of Lucien back with you.

Once you are ready, enter the gate. The entire icy passage is lined with 6 smaller inlets, each containing a chest which may contain ice arrows. However, the area is crawling with ice spiders (level 42) who do not show up on the mini-map, and may attack unremittingly while you are searching the chests. It will also be necessary to search the chests multiple times to obtain enough ice arrows; up to 14 arrows can be found in any one chest, but usually only a few chests will contain any arrows in one respawn period. It is recommended to change worlds to reset the chests, and obtain arrows quickly. If you are using abilities, you will only need two or three. More may be required without abilities.

The Fire Warrior of Lesarkus

Items needed: A bow, the pendant of Lucien, ice arrows, food/prayer potions, any one of Ava's Devices (to waste fewer arrows), good ranged armour (recommended), and 20 limpwurt roots to continue on without repeating this step

Once you have a good number of arrows, return to the central corridor and enter the north gate. Head north into an alcove where there is a lever on the north wall. Search the lever for traps first, then pull it. If you pull the lever with less than 42 Thieving, you will fall into a spike pit and take 200 points of damage. Successfully pulling the lever opens the gate into the Guardian Chamber, to the west. You have to enter the chamber quickly, or the lever and trap will reset.

Head to the north side of the chamber and try to open the door. A Fire Warrior will appear, and use a fire blast to shove you away from the door, although deals no damage. He must be killed using the ice arrows before the door can be opened.

With 40 Ranged, using abilities and a yew shortbow, lower levelled players may be able to defeat the Fire Warrior of Lesarkus using as few as two arrows. You can pick up ice arrows on the ground. It may take a long time to get enough arrows, especially for lower levelled rangers, so having good food, or protect from melee and some prayer potions may be beneficial.

Once you have defeated him, you may pass into the next room. Waiting for too long will cause him to tell you to come back when you are stronger. However, you can continue fighting him and he will not have recovered to full health.

I get by with a little help from my friend

After passing through the door, talk to Winelda, who will request 20 limpwurt roots in exchange for transporting you across the lava in your path. If you already have the limpwurt roots in your inventory, she will take them automatically saying you're well prepared. Otherwise, give her the roots, and after a short cutscene you will be teleported across. Run to the end of the passage, past the large room, the skeletons and lesser demons, until you reach a safe area where you will find a shiny key. Take the key and then head north-east and enter the compound of the Guardians of Armadyl.

If you die while obtaining the staff or by the lesser demons, you can get across the lava again without paying the limpwurt roots, and the fire guardian does not have to be killed a second time.

Side with the Guardians

Remove the pendant of Lucien and talk to one of the Guardians. They will be impressed that you have travelled so deep into the temple. Wearing it will make the guardian you are talking to be aggressive towards you, so if this happens, trap it, take it off and talk to another guardian. State that you are looking for the Staff of Armadyl and that Lucien will reward you for it. Disappointed, they will say that evil is lurking around you and gives you an option to be splashed with holy water; say that it is time for your yearly bath. The Guardian will cleanse you of Lucien's influence and warn you that he is a Mahjarrat, who must not get the staff, lest he become too powerful.

He/she will then give you the pendant of Armadyl, so that you can attack and defeat him. You may now either teleport out, or go back into the passageway, head east, and go up the ladder. You will find yourself in a shed outside McGrubor's Wood; use the shiny key to exit the shed. There is a fairy ring in McGrubor's Woods - just head west of the shed and slip through the loose railing.

After teleporting to Edgeville, make your way to the building across the River Lum, just outside the Grand Exchange western wall and south of the fairy ring dkr. You can also use Edgeville Home Teleport and run north-east across the bridge, then south. Equip the pendant of Armadyl and enter the house there. Now attack Lucien; he has only 1 life point. Lucien will state that he doesn't have time for this, and that he will get someone else to do his bidding.

Go to the north-west corner of the compound, and enter the small room. The staff is located on a table in the southern part of the room. When you attempt to take the staff, the guardians might catch you and attempt to stop you. Kill them if needed until you obtain the staff. Once you have the staff, you may either teleport out or go back into the passageway, head east, and go up the ladder. You will find yourself in a shed outside McGrubor's Wood. Use the shiny key to exit the shed.

After teleporting to Edgeville, make your way to the building across the River Lum, just outside the Grand Exchange western wall and south of the fairy ring dkr. You can also use Edgeville Home Teleport and run north-east across the bridge, then south. Enter the house and deliver the staff to Lucien. 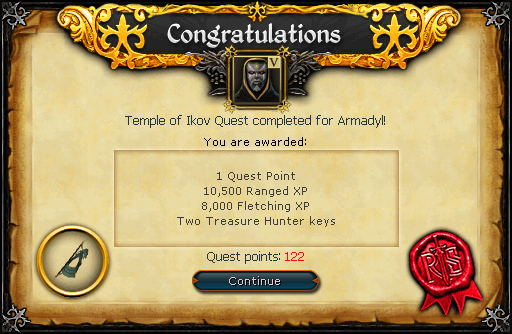 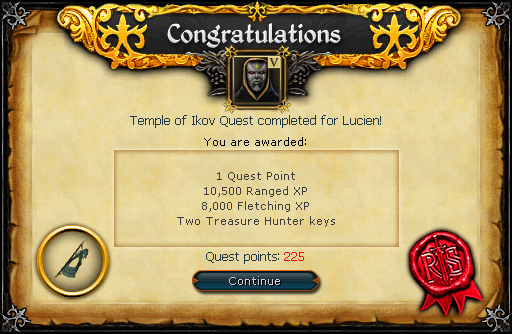 Completion of Temple of Ikov is required for the following:

Retrieved from "https://runescape.fandom.com/wiki/Temple_of_Ikov?oldid=24307655"
Community content is available under CC-BY-SA unless otherwise noted.