The Temple of Marimbo is a temple in Marim, Ape Atoll; it is dedicated to the monkey goddess, Marimbo. Marimbo takes the shape of a giant gorilla, yet she is a shapeshifter. The temple is only accessible during and after Monkey Madness.

Players use the temple for melee training without the use of any food or prayer potions. Players teleport to the temple with good prayer armour and use Protect from Melee or Deflect Melee to fight level 88 and 89 Monkey Guards. If a player can manage to maintain their life points at a low without the risk of dying (if poison is healed) it is possible to use Dharok's to do massive damage. When their prayer runs low, a player can pray at the Gorilla Statue which functions as an Altar near the gorilla spawns. The altar confers the advantage of being able to run many prayers at once, such as Incredible Reflexes, Ultimate Strength, Chivalry, Piety or Turmoil.

Since the gorillas occasionally heal, a player can get a good amount of experience from one gorilla. The bearded gorillas near the trapdoor can block players from moving past them, similar to barricades in Soul Wars and Castle Wars, so it's best not to get trapped since a monkey greegree cannot be used during combat. There is also a spider which can attack players and poison them up to 38 damage each time. They do not need to damage a player to poison them. Once they are unaggressive, going up the stairs behind the altar doesn't make it re-attack but going up any other ladder, going too far south or west will make it attack the player again. The amount of experience gained from here is very high (some of the highest in RuneScape), but the training can be monotonous and the drops from the gorillas are very low in value.

This place is currently quite unused because a player must have started a master quest (Monkey Madness) to get there. It is similar to the armoured zombies that become available in the quest Defender of Varrock. There is an altar near the zombies, so the same training strategy can be used. Since armoured zombies have numerous advantages (weaker, less defence, closer to a bank, Salve amulet can be used, better drops), they are a better choice for training. The only drawback is that Defender of Varrock's requirements are more difficult to obtain than Monkey Madness.

The Temple of Marimbo Dungeon is found under the temple, and is visited during the Monkey Madness and Recipe for Disaster (Freeing King Awowogei) quests. 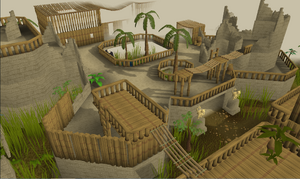 The exterior of the large temple 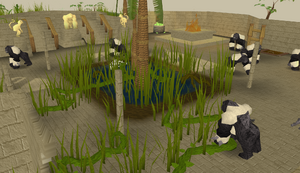 The interior of the temple
Click an image to enlarge
Retrieved from "https://runescape.fandom.com/wiki/Temple_of_Marimbo?oldid=21421959"
Community content is available under CC-BY-SA unless otherwise noted.